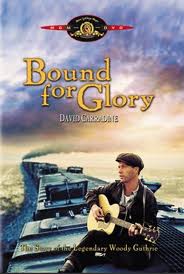 At its base, Bound for Glory is just a simple biopic about Woody Guthrie. In execution, it turns out to be a lot more. We actually learn very little about Woody Guthrie’s life. I don’t know the exact statistic, but I would guess that it covers no more than a few years, with an end title that tells us briefly of his death. And basically all of the experiences shown onscreen can be seen in other films, most notably John Ford’s brilliant American masterpiece The Grapes of Wrath.

To be absolutely fair, the scenes of migrant workers’ woes are at least equal to those in its predecessor. A good one-line summary of Bound for Glory might read “a modernist equivalent of The Grapes of Wrath told from the point of view of folk singer Woody Guthrie.” But Bound for Glory has a few things that make it stand out from other films, that make it as memorable as The Grapes of Wrath.

First and maybe foremost, you have the brilliant and gorgeous cinematography of the great Haskell Wexler. I’m no expert on cinematographers, but Wexler is one of only three I can name offhand (the other two being, if you are interested, Vittorio de Sica and Sven Nykvist). I love Wexler’s work in films like Who’s Afraid of Virginia Woolf? and Matewan (a thematically similar film directed by the great John Sayles). But what Bound for Glory most resembles is Wexler’s very controversial cinematography on Days of Heaven. Not controversial because of anything specifically photographed, of course, but, if you know the story, a different cinematographer took credit as lead DP, leaving Wexler with a credit that was something along the lines of “with additional photography by”. Wexler claims to have photographed more than 50% of the scenes in the finished film. He has sat through the film several times, I have heard, with a stopwatch.

Bound for Glory, at any rate, is one of the most beautiful films you’re ever likely to see. It’s golden colours are beautiful, and the camera is moved gently, but with precision. This film actually has the first shot that used a steadicam, although I had forgotten to keep an eye out for it when the film was playing (I was far too engrossed). My favorite scene is one where Guthrie and a black hobo have left the boxcar of a train and move to the top of it.

There they sit and converse as the most beautiful landscapes in our country pass by behind them. These are some of the best shots I’ve ever seen. And just because of those shots, even if the film didn’t contain a plethora of other relevant materials, I would call this film one of the best ever made about the United States.

Secondly and thirdly, this film is about Woody Guthrie, one of the greatest American artists of the past century. David Carradine, who, in other performances, has never convinced me that he was as good as his father, John (who was in Grapes of Wrath, incidentally), or his brother, Keith, breaks apart my former opinion of him and delivers a masterful performance. I don’t know whether I could identify why he is so good in this film. It’s as if he has an aura about him. He really does, however, seem to enbody Guthrie’s convictions.

Throughout the film, Guthrie’s music is played, whether sung or as an extra-diagetic score. This is great American music. So much of it has become part of the soundtrack to the American life. I mean, I remember learning songs like “This Land is Your Land” and “This Train” in elementary school music class. In his day, Guthrie had difficulty in getting those kind of songs out to the public. His bosses were constantly ordering him to tone down the political edge of his music.

Luckily for America, he steadfastly refused to do so. Woody Guthrie was a true American hero. Bound for Glory depicts that as much as he could have hoped for.