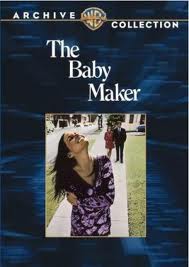 Barbara Hershey plays a hippie girl who is hired to have the baby of a middle class couple (Collin Wilcox-Horne & Sam Groom). The film deals with the clash of values between Hershey, along with her boyfriend (Scott Glenn), and the couple. It also deals honestly and surprisingly fairly with the emotional turmoil all four characters go through.

Supposedly the film was dismissed upon its released because of the way it depicted hippie culture, but it is much more positive than a good amount of the films of the day (see Joe, for instance). It neither accepts nor dismisses either of the two classes, but instead deals with the four principals as individuals.

The four characters are sensitively written (director Bridges, most famous for writing and directing The China Syndrome, wrote the script here, as well). Hershey, Wilcox-Horne (AKA Wilcox Paxton), Groom, and Glenn all give exceptional performances.