When Dinosaurs Ruled the Earth

When Dinosaurs Ruled the Earth – 1970
Enter an age of unknown terrors, pagan worship and virgin sacrifice… 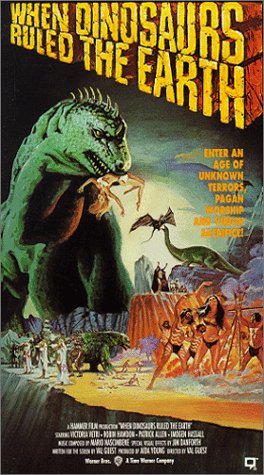 When Dinosaurs Ruled the Earth (1970)

When Britain Made Some Crap Movies,
I remember watching this aged about eleven and not thinking much of it then and when I watched it on Sky movies a couple of weeks ago I liked it even less. What’s wrong with the movie can be summed up with the opening scene where a bunch of bikini-clad blondes are going to be sacrificed? If the time period is set ” when dinosaurs ruled the Earth ” how come there’s human beings? As every boorish schoolboy knows dinosaurs died out millions of years before primitive man walked the surface of the planet. Oh and the voice over informs us there’s no moon which is another anachronism. BTW why are the blondes going to be sacrificed? To increase the collective IQ of humanity?

Actually watching this film as an adult male I was very impressed by the costume design or rather the lack of it. Yup it’s a Hammer production so you just know that the female cast were chosen because of their lung capacity, but this leads me to ask: If that’s what women looked like in the stone age how come it took hundreds of thousands of years for the population to reach six billion? Costume design aside the rest of the production values are very poor, much of the location exteriors were obviously filmed in a studio with sea borne scenes filmed in a swimming pool and it goes without saying the (Not very special) special effects are of a DOCTOR WHO standard.

Be warned that if you’re writing an article on stone age man don’t use this film as a source of information. I’ve already pointed out some mistakes and here’s some more things that are difficult to accept
1) In the stone age everyone had perfect teeth
2) In the stone age people from different tribes had no problem understanding one another if they pointed their fingers
3) Dinosaurs always make the same screeching noise no matter what species they belong to
4) When a dinosaur hatches from an egg it grows to adulthood within a few hours
5) Animals like snakes and crabs were a lot bigger in the stone age
6 ) If a cave woman has blonde hair she will almost always have brown eyes , while a cave man with dark hair will almost always have blue eyes indicating that genetics were somehow different in the stone age.