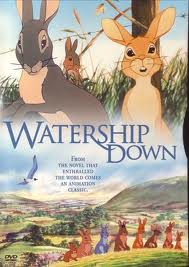 Excellent animated film–more for older children and adults,
British animated film about a bunch of rabbits leaving their old warren (which one psychic rabbit can tell is going to be destroyed) and searching for a new one. The movie recounts their adventures searching for one.

It may sound like a movie ideal for little kids–but it really isn’t. It’s an excellent adaptation of Richard Adams book which was written more for teenagers and adults. It’s an ecological tale of how men are destroying the earth and (inadvertently it seems) killing innocent wildlife. It’s also a very interesting story about how a group of rabbits survive on their own.

The animation is excellent–right up there with Walt Disney. The score is great, the script intelligent and the voices used perfectly match the characters. However, as I said, this isn’t really for little kids. The story is dead serious and the only humor is provided by the bird Kehaar (who I personally found very annoying although Zero Mostel DOES have fun with the voice). Also, at the end, it gets very violent and quite bloody.

When I saw it in a theatre in 1978 one small kid was in tears by the conclusion. So, use your own judgment but I would never let a small kid see this. This is perfect for teenagers and adults. A 10.

Would have been my favorite film if I had seen it when I was a kid,

If I had had this video when I was 8 or 9, I think I would have watched it as much as or more than I watched any other video that I had at the time. It’s quite an extraordinary film. I’m 21 now, and I found it very exciting and involving throughout. The only problem is that it always seems like the episodes in the film happen a bit too quick, making it pretty obvious that it was adapted from a much longer novel.
Episodes that seem very important only last for three minutes or so. And they never did free the rabbits in the pen at the farmhouse.

Still, it’s a great movie. While not for the very young children (there is a bit of violence and gore), I think any kid 8 or above would really love this film. Learn that you don’t have to just buy videos of recent films for children. Some of the older films are much better. 9/10.