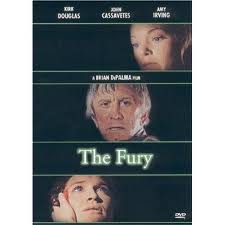 Story involves two teenagers–Gillian (Amy Irving) and Robin (Andrew Stevens). They both have the power to make people bleed and see past events. Robin is kidnapped by a secret government agency and Gillian is going to the Paragon Institute to learn more about her “power”. There’s a LOT more going on but it’s too confusing to get into.

When I saw this on video back in the 1980s I loved it. Seeing it now I hate it. The story is very confusing with way too many characters and plot holes galore. The dialogue is terrible (I kept playing back scenes on the DVD because I couldn’t believe what I had just heard) and this moves VERY slowly (it runs two solid hours).

The acting doesn’t help. Irving is too weepy and whiny (but she IS great in the final scene). Stevens has never been a good actor. Douglas walks through his role and John Cassavates (playing the bad guy) gives a one-note performance. The only good acting comes from Carrie Snodgrass, Charles Durning, Carol Eve Rossen and (especially) Fiona Lewis.

It has some good things–the direction from Brian DePalma is excellent (especially Irving’s slow motion run from the Institute) and there’s a good score by John Williams. Also it does have a few incredibly bloody deaths. These were considered extreme back in 1978 but they aren’t anymore (and look incredibly fake). There’s also a great final scene and I got a good laugh over the incredibly dated video games Snograss and Irving play at one point. Also Daryl Hannah’s first film.

So it DOES have some good things but the slow pace, confusing story and lousy dialogue sinks it. I can only give it a 5.