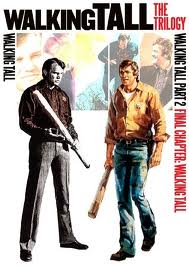 If you are a southern male who grew up in the 1970’s, “Walking Tall” is your “Gone With The Wind”. This 1973 movie is based on actual events in the life of Sheriff Buford Pusser of McNairy County, Tennessee during the 1960’s. Though the screenplay takes some liberties with Pusser’s story, it is an exciting account of one man taking on organized crime and corruption .

The story begins with Buford and his family moving back to his home town in McNairy County. Shortly after arriving, Buford realizes that his home town has changed. Gambling, prostitution, and bootlegging have taken over. Buford exposes the gambling operation to be corrupt and is brutally beaten and left for dead. He recovers and seeks vengeance using a big piece of lumber. He is arrested for his troubles. Buford is cleared of the charges and is soon elected Sheriff. He promises to rid the county of crime and corruption. The rest of the movie shows how difficult it was for Buford to follow through with his promise.

Buford Pusser is played by Joe Don Baker, who gives the performance of his career. Baker’s Pusser faces the tragic events of the movie with a sense of sad but heroic nobility. The audience is able to feel what Pusser must have felt when these events actually happened through Baker’s brave performance.

The story is ultimately a tragic tale of one man who walked tall and stood up against the forces of corruption. It is the rare action movie that makes you cheer and cry at the same time. This is essential viewing for anyone who loves true heroes.