Virgin among the living dead

Virgin among the living dead – 1973
aka Christina 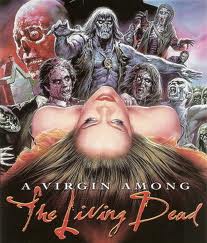 Pure cult…but not accessible to everyone.,
Jesus Franco is one remarkable director. He made tons of films by using tons of different names. Some of them are absolutely brilliant and few of the greatest Italian cult titles out there. Some of them are rather disappointing and only enjoyable if you’re a die hard cult fan. Virgin among the living dead (I use the title I think it’s best known as) belongs to category number 2, I’m afraid. It doesn’t make the least bit impression and unfortunately, it ain’t bad enough to be “good”.

In this castle, some family members of the girl live together. These people are the living dead…zombies, but they look like normal people. Christina sees her dead father appear ( with the rope around his neck all the time, that’s rather funny ) and he warns her about them and he tells Christina to get out of there. what else is there to say about Virgin among the Living Dead ? Nothing actually, these kind of films still beat the mainstream and average nowadays horror films but overall they don’t mean much. Well, at least not this one.

I can give a lot of other titles Jess Franco made who DID were fascinating and masterpieces. The awful Dr. Orlof just to name one. I don’t really blame Jess Franco for this. Like I already said, he made enough movies to check out (about 200, almost all of them made with a different name) My advice : if you’re not a true Italian cult fan, skip this one and start your search for Dr. Orloff.