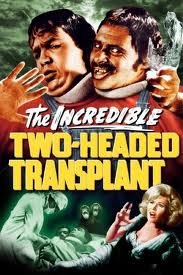 Can I vote this a zero?

A mad doctor (Bruce Dern!!!) adds the head of a homicidal maniac to the body and head of a very big mentally-retarded man. The creature escapes and you can guess the rest.

Truly horrible, sick horror film with an incredible amount of blood, sadism and sexual content for a PG rated film. The script is full of howlers and has severe continuity problems–at one point Dern and his wife (Pat Priest) are seeing a friend out to his car. It’s mentioned a few times that it’s late at night, but it’s clearly bright and sunny outside! Also there is noisy, loud “music” in the soundtrack that will set your teeth on edge. As for the acting–Dern looks miserable (no shock there!) and walks through his role. Poor Pat Priest! As his wife she’s given nothing to do but be a victim or a sex object. She’s assaulted (while in a bikini), is tied up (while in a very small nightgown), drugged, hit and locked in a cage! The woman somehow maintains her dignity. Casey Kasem (!!??!!) plays a best friend (badly). And John Bloom as the mentally-retarded man gives new meaning to the word “wooden”. Everybody else is ever worse!

Bad dialogue, terrible acting, lots of gratuitous violence (at one point a person’s face is blown away!) and sex. It’s almost bad enough to be good but it’s in such incredibly bad taste. And there’s a title song (!!!) sung by the immortal Bobbie Boyle.