The House of Seven Corpses 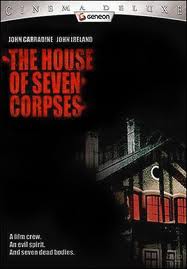 The story here is predictable–a film crew trying to film a horror movie in a place where murders occurred. Three guesses what happens. This isn’t a total bomb–the cast is fairly good with pros John Ireland, Faith Domergue and John Carradine giving the best performances. It’s reasonably well-made–for a low budget film. Just don’t expect any nudity, swearing, blood OR gore (the film has a very mild PG rating). I was never totally bored–it’s OK viewing on a quiet night. I saw it on video–it was a HORRIBLE print–very dark and some scenes were impossible to see. Still I didn’t hate it and it does have a cool ending which surprised me–basically nothing happens up till then so it catches you off guard. Worth seeing but only if you’re a horror film completest.