The Eagle Has Landed

The Eagle Has Landed – 1976
In 1943 sixteen German paratroopers landed in England. In three days they nearly won the War. 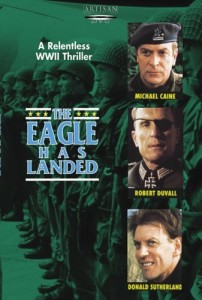 Jack Higgins ? Surely one the most clichd commercial writers there has ever been . Maybe he’s not the worst writer to make millionaire status since there’s a lot of competition for that tag like Harold Robbins , Jackie Collins or even that dreadful hack called Rowling who has conned a lot of children out of their pocket money by publishing the same mediocre book year after year , but certainly as a writer Higgins is rather poor and it’s no surprise that for many years film producers are totally disinterested in buying the movie rights to his stories

THE EAGLE HAS LANDED is a typical Higgins story – Clichd and with a ludicrous plot . What’s it about ? A bunch of German paratroopers disguised as Poles drop into Norfolk in 1943 on a mission to kidnap Winston Churchill thereby bring about a negotiated settlement with the Western allies ? Can anyone see a flaw with this plot ? If you wonder what I’m talking about please read a history book on the second world war . Found it yet ? You might notice that Churchill was never kidnapped by German paratroopers which leads even the most ignorant audience member to have a rough idea of how the movie will end . On top of all that you find yourself comparing the movie to the far more superior Graham Greene adaptation of WENT THE DAY WELL which features a very similar plot
But it’s the clichs that really get me with this movie . I don’t doubt that from 1939-45 many Germans disliked Nazism and were disgusted by the genocidal policies of the party , but watching this movie you’d think EVERYONE was physically opposed to Nazism .

Kurt Stiener ( A banal German name but better that Schmidt I guess ) assaults a totenkopf officer and vainly tries to save a Jewish woman from a death squad in Poland . Yup happened all the time I imagine , while Liam Devlin is mistaken as a gestapo member in a bar , has whisky poured over him and thrown through a window . Yes I’m sure if someone has the power of life and death over you and your family and you slightly disagreed with their racial politics you too would want to give them a piece of your mind . Oh I’ve just looked up a history book called History Of The Second World War And Why Germany Lost by Jack Higgins that fails to mention the lack of resources Germany had , or the slow degradation of its industrial power by allied bombing or massive loss of manpower suffered on the Eastern front , instead he states Germany lost the war because the average German hated the Nazis more than they hated the countries they were at war with !

If the clichs aren’t bad enough we also have to endure some ridiculous plot devices . IRA man Liam Devlin ( Who wants to overthrow the British empire without blowing up innocent passers by – Yawn ) embarks on a relationship with a local girl within five minutes of landing in Norfolk . I guess this is to lull a potential female audience into the story , but would any woman be interested in a Jack Higgins story ? Would anyone with any common sense be interested in a Higgins story ! Oh and not wanting to be shot as spies the German wear their Luftwaffe uniforms under their Polish uniforms . Let me see now , they don’t want to be shot as spies so if they wear their own uniforms under their disguise this will protect them under the terms laid out by the Geneva convention ! Actually it won’t because they’re spies / assassins . Of course this is another plot device , another daft plot device.

This is a really stupid movie but I have no hesitation in awarding it six out of ten simply because the cast go out of their way to rise above the material . Michael Caine was infamous in the mid to late 1970s to taking on roles that were obviously just to pay the rent but he manages to make Kurt Stiener as well rounded and as affable as a thinly written cypher can be . Donald Sutherland steals every scene he’s in but it’s Robert Duvall who gives the stand out performance as a German Oberst . It’s a very subtle performance in which his body language says far more about his character than the written dialogue . Uanfortunately Larry Hagman gives a terrible performance as an American officer . Remember the sheriff in THE DUKES OF HAZZARD ? I’m sure that was inspired by Hagman’s performance here