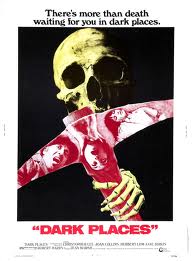 It’s such a shame that this film wasn’t produced by the Hammer studios (or Amicus…or maybe Tigon), because if that were the case, it probably wouldn’t be so underrated and overlooked as it is now. Dark Places has suspense, a professional director, a great cast and – especially – a truly cool plot. Asylum administrator Edward (Robert Hardy) ‘inherits’ the large mansion of a deceased patient. The legend says he hid a fortune somewhere in the walls of this house but he also went mad there after the murder on his wife, his two children and the governess. Edward begins the search for the lost money but there are more rivals in the field. The town’s doctor (Christopher Lee) and his ravishing sister (Joan Collins) constantly try to intrude the house and even the seemly honest notary (Herbert Lom) becomes greedy…but then, the house itself becomes the biggest threat.

As you can read, this film offers great excitement. Asylums, treasure-hunting and haunted houses! What more could a Brit horror-fanatic possibly ask for? The tense climax is terrifically built up and the film features quite a lot gore considering the time it was shot. The budget is low and the project obviously lacks efficient make-up effects. But the wholesome is very atmospheric and quite original so I don’t really care if it doesn’t look too convincing. ‘Dark Places’ was directed by Don Sharp, who previously made the Hammer classic ‘Rasputin: the Mad Monk’ and several other great horror titles, such as ‘Psychomania’ (very underrated as well), ‘The Brides of Fu Manchu’ and ‘Kiss of the Vampire’. Robert Hardy plays an excellent double-role, while Lee and Lom look as ghoulish as ever. The nearly perfect cast is completed by two stunningly beautiful actresses: Joan Collins and Jane Birkin. In case you’re a devoted Hammer fan, or just an admirer of ghostly 70’s stories, Dark Places is the ideal film for you. Severely underrated horror fun!