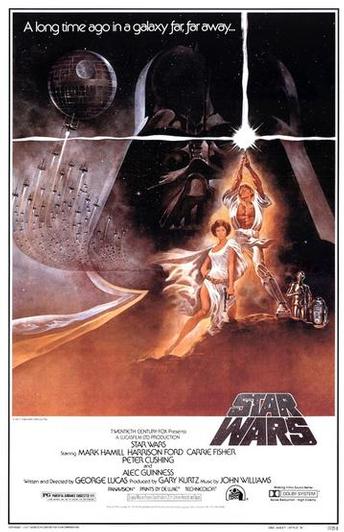 Your First Step Into A Larger World,
It’s hard to remember a time before “Star Wars,” even for those of us who were there when it came out. For teens and pre-teens like me, this was like cosmic compensation for missing the Beatles, a singular entertainment event that crystallized the era and reverberates still. I’ve gotten the same reactions telling young people about seeing “Star Wars” in its first run that men of past generations got telling what they did in the war.

Since the film has come to serve as a cinematic yardstick of popcorn greatness, it’s easy to overlook its considerable merits. People often attack the film because they don’t like the way Hollywood followed up on it by pushing for dice-rolling blockbusters rather than the smaller, personal films of modest but dependable box office which went out of vogue after “Star Wars” and made the 1970s the last great decade for movies. Frankly, though, I can’t see the 1970s being as great a decade without the joy of “Star Wars,” just as the 1960s wouldn’t have been the same without “Sgt. Pepper’s Lonely Heart Club Band.”

The story is simple, cleverly so: In a distant galaxy, a farm teen with big dreams stuck in a rut finds himself holding intelligence that could help overthrow an evil galactic empire. He seeks the advice of “a crazy old man” who tells him it is his destiny not only to get the information to rebel forces but become a member of a legendary group of powerful fighters, thought to be extinct, and restore justice and mercy to a seemingly uncaring universe with the aid of a metaphysical power called “The Force.”

I frankly don’t care how much consultation director-writer George Lucas did with myth-scholar Joseph Campbell, or how often he read “Beowulf.” The results speak for themselves. “Star Wars” is a tremendous thrill ride, serving up butt-tightening action sequences and extravagant special effects that have lost none of their power.

In his DVD commentary, Lucas points out the risks he took spending the opening 15 minutes focusing on two droids and never trying to explain the strange world we find ourselves in (other than it being “a long time ago, in a galaxy far, far away.”) It’s an amazingly successful strategy, especially in how it pays off, plunging us into a dream world we accept for what it is because there are no handholds of conventional familiarity and even fellow humans are scarce.

The opening sequence also pulls you in, remarkable not only for its composition but for the way it is so little commented-upon by “Star Wars” fans. The sense of doom in the squad of white-helmeted men, as their ship is swallowed up by a Star Destroyer and they wait for an attack they know they can not hold off, is presented in a short sequence of images that gives early notice of the film’s stellar editing as well as direction and photography. It’s a vision of hell we are happy to escape in the company of the two droids, R2-D2 and C3PO, and tablesets the rest of the adventure grandly by giving us a sense of the stakes and the cruelty of the foe. Darth Vader’s “inquisition” of the ship’s commander a little later on is likewise an ingenious introduction to one of filmdom’s most frightening villains.

The special effects made “Star Wars” important, but the acting is what makes it entertaining. Alec Guinness sells the concept as the aged Jedi Obi-Wan Kenobi; while Harrison Ford as the acerbic smuggler Han Solo and Anthony Daniels as C3PO give us most of the laughs, but the film would not work nearly so well without Mark Hamill’s performance as the naïve farmboy, Luke, or Carrie Fisher’s regal beauty and sense of purpose playing the heroic, noble, and ever-so-slightly-snooty Princess Leia. I even like George Lucas’s oft-maligned script. The lines may come across as stilted, but in a way that plays to the unearthly setting, and there’s a clever balance of comedy and intelligence in the dialogue that distinguishes it from other like films.

Not sure what to say about Lucas’s later tinkering. There are things I like and don’t like; much the same others already noted, and for the same reasons. However altered, though, and perhaps reduced slightly, “Star Wars” has lost none of its magnificence or ability to instill awe. I still get a rush of adrenaline at the line “Let’s blow this thing and go home!” Doesn’t everyone?

Lucas Has Obviously Read Tolkien,
I’ve never really thought much of STAR WARS. I remember when it was released in 1977 everyone was going bananas as to how good it was. I finally managed to see it when it was broadcast on television in 1982 and was very disappointed with what I saw, okay it was entertaining to a certain degree but I didn’t believe for one moment it deserved the hype or massive audience figures. One other thing that sprung to my mind many years later is that it’s unoriginal.

I can’t help thinking that Obi Wan Kenobi has been based on Gandalf from LORD OF THE RINGS. They’re both wise old men 䞨Aey both ” die ” a heroic death and both come back as ethereal beings in the trilogy and both are played in the films by Knights of the stage. However whereas Ian Mckellan gives an outstanding performance as Gandalf Alec Guinness has little impact as Obi Wan. I do not say this lightly as I rate Guinness as the greatest actor of the 20th century. In fact as one reviewer has already pointed out none of the actors give much of a performance except Harrison Ford who is the only member of the cast who went onto become a household name. Compare the performances of the cast of the LOTR trilogy who could all easily pass as Knights of the stage.

I’m not saying this is a bad movie – it’s not. It is entertaining and does have a sense of humour and the costume design is excellent especially the storm trooper uniforms but what I’m saying is it’s not a great one either and certainly doesn’t deserve to be in the top ten movies.

And as a footnote is it just coincidence that Christopher Lee was cast in ATTACK OF THE CLONES after appearing in LORD OF THE RINGS?