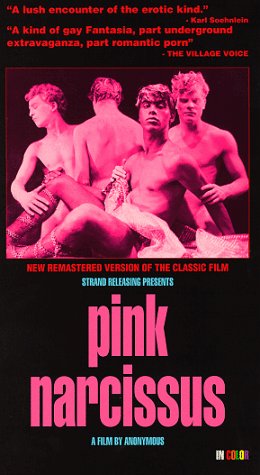 It might be supposed that this film appeals primarily to a gay audience, but over the years I have shown it to a great number of friends–male, female, gay, straight–and their response has always been one of fascination; the film exerts a hypnotic allure that few can resist. At the same time, however, I must note several things about the film that some may dislike.

If you expect a purely “skin show” type film or simple pornography, PINK NARCISSUS is likely to frustrate, for it works its magic more via tantalization than blatant nudity; at the same time, however, there is enough graphic behavior in the film to give it an X rating even today. It is also a purely visual film (there is no dialogue of any kind), and it is very much an experimental “underground” 1970s film; as such, it actually does require a certain degree of intellectual effort and interpretation.

These aspects of the film may leave some viewers cold, but those able to enter into its sensual world will find it a powerful bit of erotica.