The Pink Panther Strikes Again – 1976
The newest, Pinkest Panther of all! 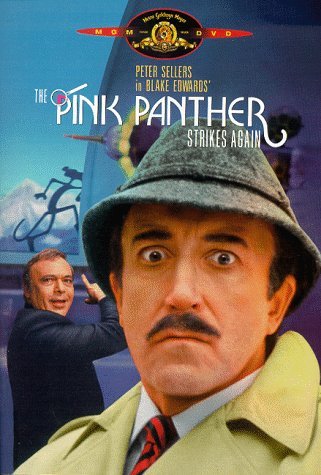 Probably The Best In The Series,
THE PINK PANTHER movies ? Started off well but then soon outlived their welcome in my opinion , I mean a French policeman with a silly accent , just how much milage can you get out of that ? But this 1976 offering is probably the best in the series simply down to the fact the best laughs are darkly comical rather than slapstick , an early example with Clouseau asking ” How ? ” to be followed a couple of minutes by a laugh out loud scene featuring a couple of old ladies . There’s also a very funny sub plot of the world’s best assassins trying to bump off Clouseau which includes several funny scenes . I don’t feel any guilty at laughing at people dying in this movie.

There are some weaker points like an overlong scene where Inspector Quinlan gives a shocked look which is embarrassing rather than amusing , and as some of the other people on this page has mentioned the movie does feel rather episodic at some points but I have no hesitation in saying this is Blake Edwards funniest comedy