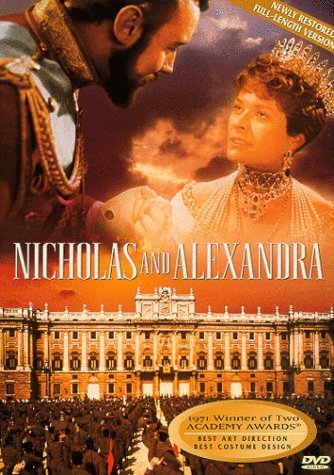 Fair Epic But Let Down By A Lack Of Narrative Drive,
I’m still trying to decide if NICHOLAS AND ALEXANDRIA is a good film or a bad film . Truth be told it’s a bit of both . Unfortunately I’m going to have a problem deciding if the bad overwhelms the good or vice versa .

This is epic film making by Sam Spiegal , but is far from being the best movie he’s produced . I had a problem with the script for BRIDGE OVER THE RIVER KWAI and I’ve got a problem with the one here . I know it’s an epic film but overlong doesn’t equal epic . For instance one of the characters suffers from haemophillia and this is mentioned in one point in the movie , but then it’s mentioned 15 minutes later , then 15 after that , then again after another 22 minutes . Just mentioning the condition once would have been quite enough . We also see characters like Lenin , Stalin , Kerensky popping into the narrative and then disappearing without little rhyme or reason . It does become obvious by the end that their inclusion probably wasn’t necessary and gives a feeling that when they do appear they are under written anyway . Rasputin especially suffers from this type of scripting and the whole movie would have worked much better if it solely concentrated on his relationship with the Tsar’s wife instead of giving us a history lesson on the last two decades of Russian imperial history.

If truth be told it’s not very good history either.

There are good aspects to the movie , and the cast are probably the best one . Perhaps Spiegel wanted so many characters included because he wanted to cast the cream of British talent . We’ve got Olivier and Redgrave both knights of the British stage alongside Julian Glover , Harry Andrews and Jack Hawkins . What a cast and as you’d expect they give very good performances . But let’s not forget the two best performances belong to two unknown actors called Michael Jayston and Tom Baker. It must have taken some courage casting these two actors in such prominent roles Jayston still occasionally appears in TV roles while Baker found world wide fame as DOCTOR WHO . And let’s not forget that a few other unknown actors like Brian Cox and Ian Holm appear in cameos .

A good film for those wanting a three hour epic or seeing a host of big name actors when they weren’t house hold names in their own household , but not really a film for serious students of Russian history