Murder by Death – 1976
You are cordially invited to dinner… and a murder! 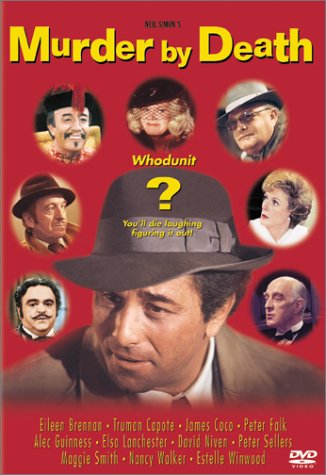 Plot:
· Millionnaire Lionel Twain invites the five most brilliant private eyes to a dinner – and a murder. So, Sidney Wang from China, Dick Charleston from New York, Jessica Marbles from England, Milo Perrier from Belgium and Sam Diamond from San Francisco arrive at the remote castle. They are welcomed by Jamesir Bemsonmam, the blind butler. At nine, a dinner is supposed to be served. The five private eyes and their companionships are in the dining room, wondering what everything is about. Suddenly, Lionel Twain appears and lets the private eyes in on his plan: Exactly at midnight, a murder is going to take place. And he offers a million dollars to the one who can solve the murder. Then he disappears. Before long, a problem arises: The butler is found dead – and it’s long before midnight! Will the five most brilliant minds of our time be able to see through the elaborate set-up staged by a criminal mastermind?

· Lionel Twain (Truman Capote) has invited the five greatest detectives to a “dinner and murder.” How can they resist? Included are a blind butler, a deaf-mute maid, screams, spinning rooms, secret passages, false identities, and more plot turns and twists than are decently allowed.

Witness A Lovely Murderpoo
Neil Simon got seriously silly for once when he penned this lovely, pitch-perfect send-up of the classic whodunit.

At the manor of the eccentric, wheelchair-bound Lionel Twain, six of the world’s greatest detectives are assembled at Twain’s invitation to solve a murder that hasn’t taken place yet. Among the notables: Inspector Sidney Wang (Peter Sellers), who might easily be mistaken for Charley Chan; Dick and Dora Charleston (David Niven and Maggie Smith), dead ringers for Nick and Nora Charles of the Thin Man series; Miss Marbles (Elsa Lanchester) and Milo Perrier (James Coco), who slightly resemble the Agatha Christie creations Miss Marple and Hercule Poirot; and Sam Diamond, played by Peter Falk as only he (or Humphrey Bogart) can.

Trying to explain this delirious mess any further is an exercise in futility. Forget spoilers; there are about seven different endings and none make enough sense to present with a straight face.

Simon’s script is uncommonly good, and uncommon for Simon. Other Simon comedies from even this, his best period, explore the pitfalls of relationships and aging with a (sometimes heavy-handed) nod at real issues and drama that doesn’t always age well. “Murder By Death” is Simon’s spoof film, and shows when he wanted to, he could be just as funny as those other writers he cut his novelty chattering teeth with on “Your Show Of Shows.” There’s so many good lines here, and we “Murder By Death” fanatics have them branded in our brains. “Let’s face it, as a man you are barely passable, but as a woman, you are a dog.” “I can’t help it, I’m old.” “I’m not a Frenchie, I’m a Belgie.” “We’re going to have a murder-poo.” “You look more like a number two to me, know what I mean?” “Mr. Twain had him fixed, and he didn’t like it.” “Have you ever made it with a big fat blondie waitress?” “You’re sure about the scorpion, Dicky?” “Your little jest escapes me.” “You have the best tush in high society.” “Idiot! Didn’t finish mushroom story!” You can just go on and on.

Even better are the performances. These are some damn fine actors on display, and they all seem to have a great time cutting up and playing to the farce. Just watching the great Alec Guinness doing blind-man slapstick with TV Rhoda’s mom is pretty cool. As far as picking a favorite detective, I have a different one each time. For a while, it was Peter Sellers as Wang, given Sellers is a personal fave and he has fun playing up the Chan stereotype. But lately I’m down with James Coco’s Perrier, and his wonderfully bitchy back-and-forth with his chauffeur, played by a then-unknown James Cromwell.

Small caveat: Could the script have incorporated Miss Marbles more into the proceedings? We don’t see her or her nurse either arrive or exit the Twain mansion, and they seem to get the scraps from the table in terms of dialogue. The incidental music is weak, except for the terrific titles theme. The ending is fun, but I wish the DVD people kept the scene of Holmes and Watson’s arrival, which I remember from telecasts back in the day as being one of the funniest parts of this very funny movie.

The only sobering thing about this movie is how many people in it are dead already. Death is a sad thing. Except when it comes in the form of a naked butler sitting at a table with a bill for a catered murder clenched in his hand. Then it’s funny. Very funny.

Mysterious Lionel Twain (Truman Capote) invites five of the world’s greatest detectives to his huge estate on a dark and stormy night (of course). All the detectives are parodies of famous literary characters: Maggie Smith and David Niven are doing Nick and Nora Charles; Peter Sellers is doing Charlie Chan; James Coco is spoofing Hercule Poirot; Peter Falk does Sam Spade and Elsa Lancaster does Jessica Marple. Also add a blind butler (Alec Guinness), a mute and deaf maid (Nancy Walker) and others–throw in a murder and set things going.

Hilarious Neil Simon movie. The movie looks just great and there’s non-stop one liners–almost every single one is great! The cast is obviously enjoying themselves (especially Guinness and Smith) and the mystery itself is very interesting and complex. It all ends very strangely (I can honestly say I never got the VERY end) but it moves quick, is consistently entertaining and there are plenty of in joke references for mystery film buffs.

A great film–highly recommended. A definite 10.