The Mutations – 1973
It’s not nice to fool with Mother Nature… it can be HORRIFYING! 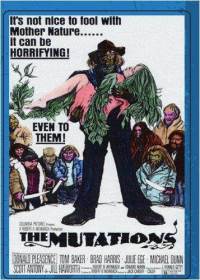 This Film Is Sick,
Original is not a word to describe THE MUTATIONS. To sum up its plot it’s a hybrid between a mad scientist film and FREAKS. Unoriginality is not enough to condemn it of course, but what makes THE MUTATIONS a truly terrible film is the fact that it’s so sickening.

When Tod Browning made FREAKS in the 1930s disability and deformity were I imagine treated differently in those days. Not so in the 1970s when the concept of a travelling ” freak show ” wouldn’t have drawn an audience. Indeed it’s highly unlikely any council would have allowed it to take place on the grounds of taste due to a public outcry. There’s no way I’d pay to go and see that and I feel disgusted I watched a film where people with real deformities are used in the name of entertainment. Perhaps the saddest one was ” The skeleton woman ” who looked like she’d just been rescued from a Nazi death camp.

I’ve outlined a good enough reason not to watch it, but may I also point out that this film is also extremely sloppy and underdeveloped in terms of script and production too. For example the hero gets turned into a man-eating plant and for no reason consumes a drunken passer-by. I say for no reason because he can still control his human emotions, which he demonstrated in the previous scene by talking to his girlfriend, and demonstrates it again at the end by attacking the villain in his lab. And this action scene seems to have been directed, edited and had make- up artists by people who were too untalented to have worked on the worst school play production. Still it could have been worse, if the rest of the film is anything to go by the production crew might have dug up a decomposed corpse and used that for the villain’s death scene. And get ready for a final shock plot twist at the end though how can anyone be shocked by the final scene when we’ve already seen exploitation of the worst sort leaves me pondering.

You’re probably asking yourself why I decided to watch THE MUTATIONS all the way through instead of switching it off in disgust? Make no mistake this film did disgust and disturb me. Well it did star a pre-fame Tom Baker as Donald Pleasance’s henchman. I can watch anything with Baker in it and to see him play a nasty piece of work does have a certain novelty value Check out VAULT OF TERROR), but even that didn’t stop wanting to switch off the TV frequently. And for my sins I had to get into a warm soapy bath afterwards and scrub myself clean, that’s how much THE MUTATIONS disgusted me