Moonraker – 1979
Where all other Bonds end, this one begins… 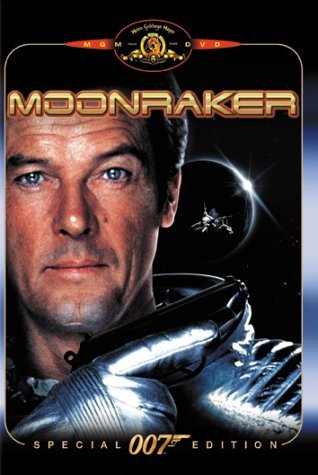 Plot.
A space shuttle is stolen enroute to London and M sends 007 out to apologize to the shuttle creator – billionaire Hugo Drax. While visiting Drax’s estate several attempts are made on Bond’s life, making Drax himself the number one suspect. Bond also meets Dr. Holly Goodhead, a NASA scientist who is also a CIA agent investigating Drax. Their investigations lead Bond to discover a plot to murder the world’s population so that Drax can repopulate the planet in his image. The chase takes Bond all over the world – California, Brazil, the Amazon Jungle and, finally, to Drax’s huge space-city over the Earth. Drax, meanwhile, has hired a old friend of Bond to take care of any problems – the steel-toothed killer Jaws……

At least I shall have the pleasure of putting you out of my misery
Moonraker is directed by Lewis Gilbert and adapted to screenplay by Christopher Wood from the novel written by Ian Fleming. It stars Roger Moore, Lois Chiles, Michael Lonsdale, Richard Kiel and Corinne Dufour. Music is scored by John Barry and cinematography by Jean Tournier.

Bond 11 and 007 is tasked with finding out what happened to the Moonraker space shuttle that mysteriously disappeared up in space. His investigation takes him to the billionaire builder of the craft, Hugo Drax, where Bond discovers a fiendish plot to start a new world of perfect human beings.

At the end of The Spy Who Loved Me we were told that James Bond would return in For Your Eyes Only, but the gargantuan success of Star Wars and a rekindling of all things sci-fi led Albert Broccoli to send 007 out into space! Armed with a $30 million budget and using only the core base plotting of Fleming’s novel, the makers crafted what many feel is the runt of the James Bond litter. The money “is” up there on the screen, it’s excess overdrive, outlandish from start to finish and actually is very very entertaining. The problem is that in James Bond terms it barely feels like a Bond movie, it actually could be any bloke propelling the story, this is a guy reliant on gadgets and not his brain or brawn, quipping away purely for the sake of a cheap laugh. Ultimately it’s a cash in, both in terms of the sci-fi boom hitting the late 70s and of the James Bond name.

If judged away from the Bond universe on its own popcorn terms, the film is a blast, literally. As a whole it’s a bit choppy, but many of the parts desperately trying to make up a cohesive blockbuster are great entertainment. Mid air scrap for a parachute, a cable car sequence brilliantly realised, centrifuge chamber peril, boat chase, laser fight and much space age malarkey. The film is chocked full of crowd pleasing moments. In fact it’s often mistaken as being a film set in space, when in fact the action doesn’t move up there until the last half hour, the previous hour and a half is spread out over France, Italy, Brazil, USA, Gutemala and of course England. The score and the title song, however, are very much Bond. With Barry and Bassey back respectively. The film is filled with appropriate atmospheric space strains and a hauntingly emotive theme song.

Charaterisations are a mixed bag. Lonsdale’s Hugo Drax is one of the better Bond villains, dignified, well educated and wallowing in a life of luxury. He’s perfectly understated in Lonsdale’s hands and in fact steals every scene he shares with Moore’s Bond. Holly Goodhead (Chiles) is a bold Bond girl with many skills, she’s a scientist and an astronaut, attractive and decently played by Chiles, if a touch unmemorable in the Bond girl universe. Kiel is back as Jaws, with the makers choosing to make him some love sick puppy dog, where once was a unique villain, now is cypher for slapstick and a crappy flip-flop of plotting, while the “love interest” for Jaws, Dolly (Blanche Ravalec), is cringe worthy. Sadly this would be the last appearance of Bernard Lee as M, but he leaves a favourable mark, as does Desomond Llewelyn as Q, but once again Moneypenny (Lois Maxwell) is all too brief, the flirt and banter she used to share with Bond now seems long gone.

With a committed Bond fan base trudging through the turnstiles to see the latest instalment, the sci-fi fans intrigued by the themes of the story, and the general blockbuster loving crowd, Moonraker made a colossal $203 million at the worldwide box office. Making it the highest grossing Bond film so far, a record that would stick until Brosnan’s debut in 1995. While critical notices were not as bad as some would have you believe, the critics clearly judging it on non Bond terms. Broccoli took notice of the fans, though, who were upset by the lack of respect to the serious side of Bond. He promised things would be different for Bond 12. 7/10

To the wannabe Bond purists who slated this film – Hey, go get a life!
MOONRAKER is so far from being a dud Bond, its not funny! THUNDERBALL undoubtedly holds that honor, with THE WORLD IS NOT ENOUGH a close second! Never developed a taste for THE LIVING DAYLIGHTS either!

MOONRAKER is a totally fun experience – precisely what a BOND film is supposed to be. Never have the innuendo’s flowed better…DR Holly GOODHEAD? – u gotta be kidding! is THAT risque enough for you or not? It also boasts the greatest and most subtle of villains, DRAX – Michael Lonsdale’s finest cinematic moment, especially when he delivers the two greatest lines in all BONDom. “Please take Mr Bond away and see that some harm comes to him!” and the all time classic “Would you please put Mr Bond out of my misery!” Those two alone rate this up in the top half a dozen Bond capers.

So what if it’s stupid? You want Shakespeare, go watch HENRY V! You want method acting? go catch ON THE WATERFRONT…you want subtle brilliance – watch SLEUTH, but if you just want a good time with a spot of action, pretty girls, and the only opportunity you’ll ever have to see JAWS in love – stick with MOONRAKER! and lay off this flick wouldja!