Ilsa, She Wolf of the SS 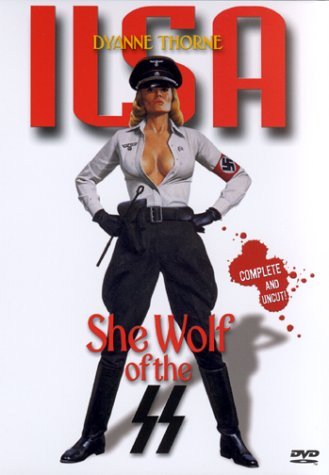 Thorne’s reign of sex and sadistic violence…
Dyanne is the blouse-bursting prototype of a cult siren here in the Ilsa Series… `She wolf of the SS’ is a shocking (at times downright nauseating) exploitation tale, set in Nazi Camp 9 during Hitler’s Third Reich-period. Ilsa is a perverted Nazi-officer with an insatiable sex hunger and a gruesome torture-fetish. Her camp is filled with innocent women and Ilsa performs sadistic `medical’ experiments on them…This results in some hard-to-watch sequences such as a girl who gets bath in water of 85 (!) degrees Celsius! Other poor victims are beaten to death by a whip, hung by their toes or infected with terrible diseases such as Syphilis.

Female nudity appears on the screen every two seconds but you can hardly enjoy the looks of it, since the girls’ bodies are subjected to blood-soaked torturing and inhuman cruelty. Thorne clearly has fun in portraying the cold-hearted bitch and she proudly shows off with her oversized breasts. Following routine exploitation standards, this film has terrible acting, uninspired scenery and a weak direction but none of these aspects is top-priority, of course.

She Wolf of the SS completely lives up to its infamous and vicious reputation and the cult value of this film is unimaginable. Two `official’ sequels followed (Ilsa – Haremkeeper of the Oilsheiks and Tigress of Siberia). The Spanish cult-deity also shot a similar film with `The Wicked Warden’ in which Thorne is called Greta.

Not for the faint-hearted!