Ilsa, the Wicked Warden – 1977
Her Prison Was HOTTER THAN HELL! 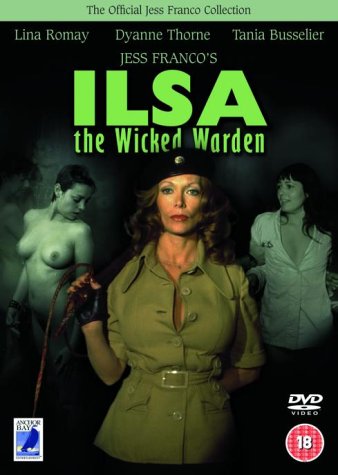 Wicked sleaze…
‘A notorious sleaze-series and I’m not involved?!?…That simply cannot be’, Franco must have thought while watching the previous Ilsa installments. And so he filmed his very own addition to what is perhaps the most infamous exploitation series ever made. Ilsa, portrayed by the blouse-bursting wench Dyanne Thorne, appears any place where vicious, nasty events occur.

Nazi experiment camps (still the most shocking film in the series), Mid-Eastern harems and Siberian torturing camps. In Franco’s vile fantasies, she runs an American hospital for deranged women. Although that’s merely just a cover-up, because in the deepest cellars of this institution political rebels are imprisoned. When a young girl goes undercover to find out what really happened to her supposedly dead sister, she gets institutionalized and discovers that the hospital is a Sodom and Gomorrah of perverted lesbian guards and sexually insane inmates. Masochism, rape and torturing are a daily routine.

None of the Ilsa movies were ever great…but at least the first two had several extra values that made them legendary. She Wolf of the SS was nauseating and downright shocking. Harem keeper of the oil sheiks inserted bizarre and absurd humor. Tigress of Siberia and this Wicked Warden have nothing to add, really. An hour and a half of pure perversion and European class-A sleaze. Dyanne Thorne is clearly getting older and her sexual charisma seems to have vanished entirely. She’s a redhead now, by the way.

Fans of the previous installments might still enjoy this film as well as devoted Thorne fans. All other audiences will simply see this is as a lame variant on the ‘Babes behind Bars’-flicks.