Hatchet for the Honeymoon 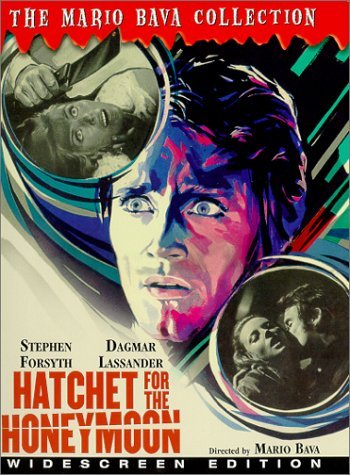 Mario Bava, reinventing the giallo!,
Man, I love Mario Bava’s work! Every film I’ve seen of his is a pure masterpiece in my eyes and a complete cinematic ‘orgasm’! Hatchet for the Honeymoon is somewhat different compared to most of his other movies and perhaps even his most accessible film. Hatchet handles about a more common horror theme (namely a serial killer and his motivations) but in the very first place it is another Bava-omnibus of stylish direction, wonderful music, beautiful scenery and a unique, tense atmosphere. Bava never ceases to surprise me…I find it truly remarkable how this director is able to portray such ugly things (murder, insanity, aggression…) in an artistic way! Also, the film is far ahead of its time with the portrayal of a horrible murderer as a classy and intelligent businessman.

Stephen Forsyth is brilliantly cast as John. He owns a fashion gallery in Paris, specialized in wedding dresses and there are a lot of models working for them. He urgently wants to divorce his wife because he despises her, but she won’t let him. Like it’s the most normal thing in the world, John confesses to the audience that he’s a multiple murderer…’ A woman should only live till her wedding day’, he says, `love once and then die’! Forsyth was a genius choice to play John; he’s handsome and extremely charismatic but also very frightening and morbid-looking at the same time. John is aware that he’s sick, yet he can’t control the urge to kill again. The second half of the film is even more brilliant, with a perfect image of a man stuck in a downwards spiral of insanity. Actually, what Bava does here, is single-handedly changing the rules of the giallo! The identity of the killer is exposed right from the beginning, yet there are numerous other aspects to discover about his personality…like what was the origin of his hunger for violence and misery?

Hatchet for the Honeymoon isn’t the director best film (that honor goes to Black Sunday, without a doubt) but it still is a perfect score of 10 out of 10 in my book. I can only bring forward one negative aspect and that is – like usual – the annoying dubbing. Definitely also worth a mention: the beautiful female leads (and side-characters) in Hatchet. Dagmar Lassander is the stunning beauty that also appeared in Fulci’s House by the Cemetary. Femi Bunissi plays another one of John’s victims. I didn’t know her, but she certainly is a gifted and gorgeous lady.

Enter the world of Mario Bava as soon as possible! You won’t regret it!!