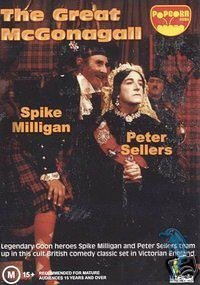 Plot:
· The tale of an unemployed Scotsman, William McGonagall whose ambition was to become England’s Poet Laureate. One minor drawback is that his poetry is terrible.

Lives Down To Its Reputation,
Spike Milligan never got an even break. After he redefined comedy and pop culture on the radio with his scripts and performances on “The Goon Show,” driving himself in the process to a nervous breakdown, he had to watch while his flabby “Goon Show” partner Peter Sellers became a film comedy superstar. By the time Milligan was well enough to try his own hand at film acting, it was already the 1970s and he had become passe.

His biggest stab at cinematic glory, “The Great McGonagall,” reveals he might have gotten out of the looney bin a little too early. Portraying a talentless Scottish poet, Milligan overacts his way through a punchy script he co-wrote with director Joseph McGrath. Sellers appears too, as Queen Victoria, and ironically the two former Goons – who used to play dozens of roles apiece each week on the radio – stick to single characters while other actors, including Victor Spinetti of “A Hard Day’s Night” and “Help!,” are given the task of performing multiple parts.

It’s a strange film that breaks down in the second half, much the way Milligan must have in real life. Still, the script offers hints of the great Goonish humor that launched a comedy revolution.
“Knock, knock.” Who says that? “A wee postman who canna reach the knocker,” is the reply.
There’s strange bits of self-indulgence, too. Scenes are broken up by actors shoving pies in each other’s faces, and at one point Milligan forgets his line, whereupon the cameras continue to run as the director and other actors coach him on what to say. It’s very bizarre, and might even be fascinating, but for the fact that the story on screen is too slender to brook such diversions.

Sellers, the one name actor in this film, is given little to do as Queen Victoria but perform reaction shots, and occasional witty lines like “Does anyone know a good solicitor” when her Prince Albert locks lips with a male messenger. The early 1970s were a dry period for Sellers, and “The Great McGonagall” was no exception. Albert wears a kilt but otherwise dresses like Hitler, a tiny joke which Milligan and the filmmakers beat into the ground. Valentine Dyall, a dead ringer for Ian McKellen, comes off best in a series of roles that include Alfred Lord Tennyson and a Zulu messenger.

“The Great McGonagall” no doubt amused its makers, who thought it would be funny to send up a bad poet endlessly mocked by fate and society, but on screen it’s no “Ed Wood” of poesy. Its too disjointed, too mean-spirited. It’s the product of a man who has seemingly given up on life, and wants to hit his audience upside the head with its sordid futility.

Milligan, a comic genius who never got his due on screen, had reason to be depressed, but you do not. Give this a miss.