Gimme Shelter – 1970
The music that thrilled the world … and the killing that stunned it! 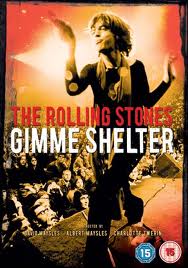 Gimme Shelter (1970)
Not only one of the greatest rock doc’s ever captured, but one of the most important of all documentary films,

Gimme Shelter details the Rolling Stones tour in 1969, as they promoted their albums Beggar’s Banquet (already released), Let it Bleed (it would be released at the end of the year), and slowly worked through material for their album for the next year called Sticky Fingers. The film is now infamous for rock fans for it’s depiction of the doomed Altamont speedway concert, where amidst a higher-than-usual pitch of angry vibes in the audience a Hell’s Angel killed a man after seeing him pull out a gun.

The rest of the film leading up to that is just as watchable (or, I don’t know if that moment, free-framed near the end, is what could be called as ‘watchable’) for fans of the Stones, showcasing some of their best songs live including Jumping Jack Flash, Satisfaction, Love in Lain, and Sympathy for the Devil. There is even a scene where the Stones listen to one of the tracks that they recorded for ‘Fingers’ (the ballad Wild Horses) that’s rather serene.

But then, of course, comes the Altamont concert, which gets an appropriate build up as the promoters and lawyers figure out the concert, which was to be the west-coast throwback to the legendary Woodstock concert that occurred earlier that year – in fact, many have called Gimme Shelter the ‘anti-Woodstock’ for its aspect of rock and roll tragedy, however they each have their own senses of the beauty and disillusionment that went with the era.

The directors, Albert & David Maysles and Charlotte Zwerin, give us the most appropriate thing to let us know what happened at the concert, much like with the hippie era in San Francisco that by 69 had deteriorated. They view the audience a little more intently than the band, and when the band plays we hear all of the toxicity in the noise that comes from the tired audience as well as the group frustrated with the state of affairs at that moment. It’s almost like a crescendo in an opera that builds to finale that’s known before it was started, and we are left with the memory of how harsh reality comes over a once-promising scene. And, like Woodstock and other non-rock documentaries, it holds unforgettable moments for people to see in future generations.

Author notes: George Lucas served as cinematographer (though all of his footage was lost); Jefferson Airplane, who also appeared in Woodstock, play as one of the day bands at Altamont; look for Ike and Tina Turner as an opening act early in the film. Grade: A+

Fascinating and disturbing,
Superb documentasry about the Rolling Stones free concert at Altamont Speedway in 1969 that resulted in a murder. As a concert film, the Stones are at their best–the footage is excellent, Mick Jagger is young and vibrant and they perform their best songs. As a documentary it shows the Altamont concert, which was all about peace and love, slowly turning violent.

For some reason, the Hells Angels were hired as security and their behavior turned the mood violent and ugly. At one point Jefferson Airplane (performing before the Stones) had their lead singer knocked unconscious by the Angels. In a chilling scene you see an Angel angrily threatening the other members and Grace Slick doing her best to calm everyone down. We briefly see Ike and Tina Turner perform too. When the Stones came on, everything fell apart. There was rampant violence (especially when they started to do “Sympathy for the Devil”), beatings and a fatal stabbing was caught on camera!

Just simply a wonderful, if scary film. Not to be missed.