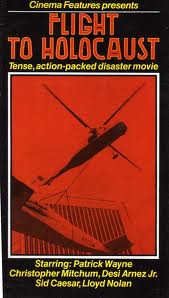 Someone has mentioned this TVM is hard to find. The fact that the plot involves a plane crashing into a skyscraper might have something to do with it but the main reason is the fact that it’s total pants. Check out this sample of dialogue from one of the characters: ” I’ve got to get grease by midnight or else I’ll die ” You can tell William Goldman had nothing to do with this script.

It also says something when a TVM markets itself as having the sons of two Hollywood icons in the starring roles. Next thing you know we’ll be having TVMs that hype themselves up because the stars once appeared in a crowd scene with John Wayne or Robert Mitchum