The Four of the Apocalypse

The Four of the Apocalypse (1975)
Le Quattro dell’apocalisse 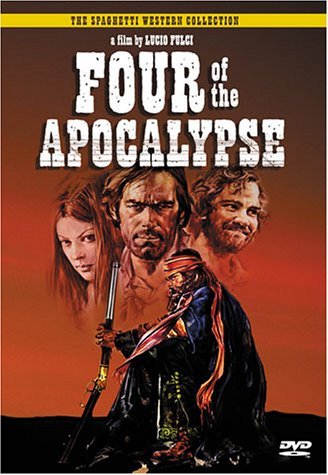 I usually prefer Italian westerns to the American ones every day of the week and twice on Sunday (because they’re much meaner and filthier) but this movie regretfully turned out a big disappointment. More particularly since it was Lucio Fulci, a man infamous for his gory and unscrupulous filming style, who sat in the director’s chair and I did not think that he would deliver a western so tame and ‘ordinary’.

The premise (described on the back of the DVD-cover) of four desperadoes wandering through Utah might sound like promising spaghetti-western material but in fact it’s an unjust and very misleading synopsis. The four actually meet in a small town’s prison and they’re forced to ride through the desert together. None of them actually is a gun-slinging hero (or heroine) and the film merely just focuses on how they’re trying to find food and shelter.

The ‘apocalypse’ of the title is never there and the script is rather boring most of the time. Also, and to my personal surprise, this film features many aspects that you don’t expect to see in a western, like a lot of sentiment (the dreadful interactions between Stubby and Bunny) and even occult stuff (the black character Bud supposedly communicates with the deceased).

The villain Chaco – based on the persona of Charles Manson – is misfit and really not that threatening. “4 of the Apocalypse” has two or three well-mounted and truly bloody gunfights but they’re actually rather pointless… They are ‘shoot-first-ask-no-questions-at-all’ sequences that add nothing to the story.

Positive elements include a great soundtrack and some beautiful camera-work. The female lead Lynne Frederick (R.I.P) looks absolutely ravishing and her performance is the only one worth mentioning, since the rest of the cast is mediocre at best.

I definitely still worship Lucio Fulci’s work but this film is truly weak compared to his gut-munching horror flicks.