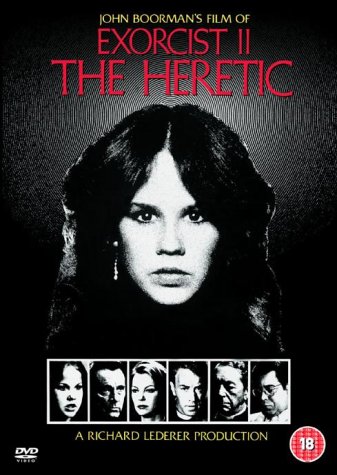 What in the devil’s name have I been watching???
Unlike many other cinema fanatics, I don’t necessarily consider William Friedkin’s “the Exorcist” an absolute masterpiece but at least it kept me fascinated throughout its entire playtime. I really had to struggle my way through this lousy sequel and it might easily be the most redundant film ever made. Due to a combination of several unfortunate aspects, this film is a complete failure but it hurts to see that a few, really good, aspects are completely lost, like the outstanding Ennio Morricone score and the ambitious skills of scriptwriter William Goodhart. Far too ambitious, actually.

For some incomprehensible reason, the plot of this sequel focuses on unraveling the events of the original, expanding the terror’s origin with environmental influences and occult African rites. Father Lamont (played by Richard Burton) is burdened with the investigation of Father Merrin’s last exorcism (the one on young Regan, which cost him his life) and discovers that there’s still a battle between good and evil going on inside Regan’s body. The premise might sound okay but the elaboration is far too complex, incoherent and even downright uninteresting. The stupidity of several far-fetched themes results in very ridiculous lines and several “WTF”-sequences. “I will spit out a leopard”? What the hell does that mean? What’s even worse is that the “horror” is totally ignored.

Exorcist II is a completely bloodless film that doesn’t even features some obscenity or grim moments. Say whatever you want about story-driven horror films, but a project that completely avoids action or gore is doomed to fail no matter how massive the cast and budget are. Speaking about the cast: I rarely saw a film that starred so many big names and delivered so few intrigue. Richard Burton overacts terribly while Louise Fletcher doesn’t seem to care about the lines she’s driveling. In fact, why would she care because even director John Boorman seems frustrated over this job?

Many little details featuring in the movie actually show that Boorman regrets not having made the original in 1973, which would have provided him with an immortal status. The only decent performance is given by Linda Blair who – by the way – looks gorgeous here in her teenage years. She’s sexy and cherubic looking at the same time and her appearance distracts you a little from the dreadful wholesome that is this film.

Very much NOT recommended, folks!