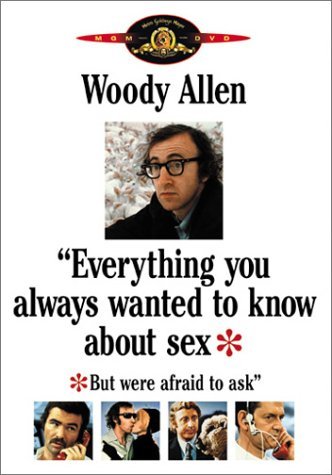 Review by the_Void
Under appreciated, if imperfect, Woody Allen gem

Woody Allen’s sex comedy hasn’t been well received, and that’s a shame because it’s actually quite good; one of Woody’s funniest films, in fact. Heh, heh…Woody.

The film starts off with a segment called “Do Aphrodisiacs really work?”, and it is without doubt the best segment of the film. It features Woody at his neurotic, comic best and keeps itself alive with an almost constant stream of giggles. After this, the film never reaches that high again, and some of the tales are rather hit and miss. The segment involving Gene Wilder falling in love with a sheep is one such miss – on one hand, it’s surreal and the idea is sort of funny; but it’s only an idea and the lack of gags means that it fails to generate any real laughs (and that’s what the film is going for – laughs). There’s a couple of other misses; the euro-style sex short is one (it’s good in idea, but poor in execution) and similarly the game show; “What’s my perversion” is surreal, and again kind of funny; but it never really goes for the money shot (another bad pun, I’m sorry) and that makes it unsatisfying on the whole. However, when it works, it really works!

As I’ve mentioned, the first segment is the best; but Woody’s sexual take on the classic B-movies of the 50’s isn’t far behind at all. Imagine it; Woody Allen being chased by a giant…tit. It sounds great and it is; the scene where Woody goes into a police station to report it is hilarious. The transvestite segment borders between hit and miss, but it’s a hit on the whole; it’s one of those sketches that has you cringing and the only thing you can do is laugh, and it works because of that. The sketch that this film will be best remembered for is, of course, the sperm sequence, which is both hugely inventive and surreally funny. I knew of this sequence before watching the film, and I was afraid that Woody might not have been able to carry it off, but now I really don’t know what I was worried about; Woody is, like in the first sequence, at his best in the scene. He plays…a sperm. His musings in this role are hilarious, in a way that only Woody can be; and overall this is one of the funniest scenes of the movie.

As I said; the sketches are hit and miss, and some of the sketches fail to penetrate, but overall this film is a big hit for me. The humour is very juvenile, and it wont appeal to some of the more mature fans of cinema; but this film should be appreciated for what it is; a real good time. Even the sketches that do miss the mark are more than funny enough to carry the film on, and this film therefore comes with a huge recommendation to anyone that enjoys this brand of silly humour.

Everything you wanted to know about sex (1972)

Tasteless but funny
The title comes from a silly sex book that came out in the early 1970s and was a big hit. Read today the book is hilariously naive and full of misinformation. Anyway, Woody Allen took some chapters from the book and came up with seven skits. The quality ranges from horrible to hilarious.

In the first Allen plays a court jester who uses an aphrodisiac to seduce a queen (Lynn Redgrave). Unfortunately she has a chastity belt on! Very funny and we else can you see Redgrave wearing a chastity belt? The second has Gene Wilder as a doctor falling in love with a sheep! Don’t worry–it’s not explicit. It’s OK. The third is a funny parody of foreign films (complete with subtitles) where Allen has trouble getting his wife (Louise Lasser) to orgasm. Good idea but it has no ending. The fourth is easily the weakest–it has Lou Jacobi who loves to wear womens clothes. The fifth is a parody of the old TV game show “What’s My Line”. It’s shot in b&w and is called “What’s My Perversion”. It has a very young Regis Philbin in the cast! The sixth has John Carradine as a mad scientist (what else?) who accidentally invents a giant breast that roams the countryside drowning people with milk! The last is the best–it shows what happens in a man’s body during sex. It has Tony Randall and Burt Reynolds in the mind and Allen playing a nervous sperm!

Tasteless to be sure but even the bad skits have some great lines. The content isn’t THAT bad–except for the breast there is no nudity but there is a lot of frank sexual talk. If you can deal with sex and laugh at it you might like this movie. Otherwise stay away. I give it a 7.