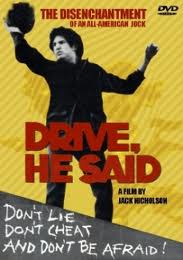 Drive, He Said (1971)
a film that finds strengths and weaknesses in it’s share of conventionality and unconventionality,
As Jack Nicholson’s directorial debut, Drive, He Said displays at the least that he is a gifted director of actors. Even when the story might seem to lose its way to the audience (and to a modern audience – if they can find it, which pops up now and again on eBay – it might seem more free formed than they think), the film contains vivid, interesting characterizations.

The film tells of two college kids: the protagonist is Hector (William Tepper, in what borders on a break-out performance), a star of the Leopards, the college basketball team he plays on. While he has to deal with a coach (Bruce Dern) who puts on the pressure to stay focused, and a on and off girlfriend (Karen Black) with her own emotional problems, there’s Gabriel (Michael Margotta), the other kid. Gabriel, it seems, is just a little more than freaked out by the possibility to be drafted, and so in his own radical mind-state he does what he can to keep out. But as Hector tries to find the balance between his oncoming fame and those he loves, Gabriel is going over the threshold of sanity.

Nicholson, on the technical side of things, displays a fascinating editing style that keeps things on edge during the basketball scenes, and implements darkness in many other scenes with a documentary-feel throughout. And from Tepper, Black, and even Robert Towne (writer of Chinatown, Last Detail, and Mission: Impossible among others, who rarely acts) he garners some credible acting work. Though in Tepper there is a tendency to downplay his emotions. In some scenes, for example, when he could act brilliantly sarcastic, he doesn’t play it for what it’s worth. From Margotta, on the other hand, there is a vibrant, twisted force in his performance, and as he descends it’s frightening, but perhaps understandable from the times (and what a climax). Dern steals most of his scenes, by the way, in a performance that should have garnered him an Oscar nomination. Every line of his dialog is appropriate, true, and it’s never hammed up like in recent coach movie performances.

But what drags down the film is that elements involving the characters aren’t explained to the degree one might wish more. The film was based on a novel by Jeremy Larner, who co-wrote the script with Nicholson, and I was expecting that the film to be longer than it was. It’s a slime volume with a lot of information, about the times, about the sport, about the underlying feelings that were with those of the younger generation.

Nicholson presents us with these characters and situations, and rarely are they shown to what’s motivating them (the anti-war protesters not included, their part’s understandable enough). Gabriel is perturbed by what’s going on in Vietnam, but what else is there? Hector, too, is a guy who has apprehensions about being drafted for the NBA, and he still loves to play, but what’s holding him back? This whole atmosphere is intriguing, how the late 60’s college/basketball experience was, but that intriguing quality, which does lead to some unconventionality, is kept at a point where it can’t go too further.

Overall, the effect of the film as a whole is bittersweet, and somewhat memorable for its good points, and not for it’s low ones. And, for sure, you can tell who’s behind the lens every step of the way. B+