Dr. Jekyll and Sister Hyde – 1971
The sexual transformation of a man into a woman will actually take place before your very eyes! 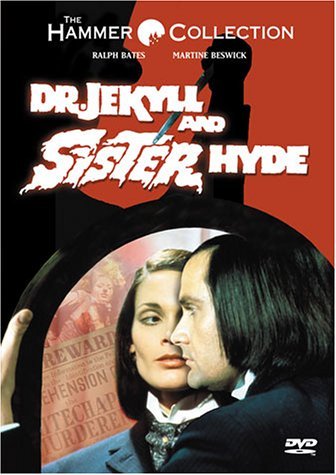 Spooky and funny at the same time. This is GREAT Hammer entertainment!!,

The story is well known, but the Hammer computation of it is pure fun like you’ve rarely seen it before! The re-writing of the ancient fable by Robert L. Stevenson is dared and perhaps a bit silly, but it never loses the power of the classic version. You simply can’t but love this film as it combines good laughs, a few shocks and terrific acting performances. Roy Ward Baker also did a sublime job as the director.

Since the year of release is 1971, this one certainly belongs to the better ones of the late Hammer efforts, if not one of the best in the entire history of the British production company. The largest praising goes out to the cast. I’ve seen Ralph Bates before, as the vicious Baron in The Horror of Frankenstein, but I didn’t like him that much at that time, neither did I like that whole film, by the way. But he certainly does a great job here, as the dedicated scientist – Dr. Jeckyll – who is about to discover the secret to everlasting life! The intense work and dedication he puts into his research is spooky and funny at the same time.

A pure joy to observe and a very bright performance. As an important substance of his experiments, he tests the effect of female hormones on himself, which makes him turn into his alter ego, Sister Hyde. He then becomes a stunning beauty, walking and talking through the body of the absolutely gorgeous Martine Beswick! This former Bond-girl (From Russia with Love) could be described best as every man’s wet dream. As a cover for Dr. Jeckyll, sister Hyde goes out on the streets at night for killing new hormones! The alter ego slowly takes control over Jeckyll’s manhood, which leads to a couple of hilarious and well-portrayed situations.

As said before, the screenplay of this film is one you’ve got to love! Enormous fun! The Jack-the-Ripper settings and atmosphere are terrific and there even is some good bloodshed to enjoy for the real horror freaks! Highest possible recommendation for this one!