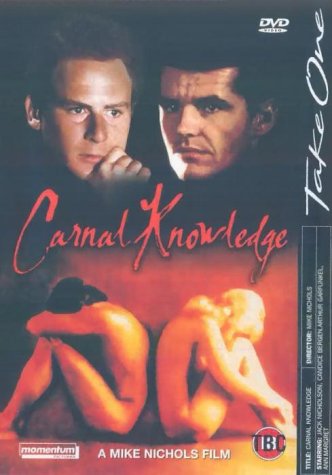 Mike Nichols directed Jules Feiffer’s script of two men in their times with the opposite sexes, beginning with college years, then years later when they have occupations, and settling on middle age. Jack Nicholson creates one of his more complex characters here, which like About Schmidt or The King of Marvin Gardens, doesn’t end up the happiest guy in town. His Jonathan is lusting, condescending, scared (deep inside), angry, and intelligent all at once, though never knowing himself well enough to know the one he’s getting his rocks off with. On the flip-side his best friend Sandy (Art Garfunkel) is sensitive, unsure, though without a feeling of overt confidence and control like Jonathan has, and that feeling of confidence over the other sex is what keeps them together in discussion, and serves as a tinge in their friendship in their older age.

In college, Sandy meets Susan (Candice Bergen), and is more of a friend at first, while Susan begins an affair she didn’t intend on with Jonathan. This unfolds, and when they graduate and are out in the world Jonathan meets Bobbie (Ann Margaret) who is a pure vixen with, at the behest of Jonathan, is a louse and wanting a commitment Jonathan can’t take. The last scene with Rita Moreno, and especially the last shot featuring an ice skater Jonathan saw once, say it all about his character- essentially, as it is with nearly all men, he wants what he can’t have.

Many of the angles and many of the one shots of faces for long stretches, the camera compositions and time length, etc, reminded me of techniques that director Ingmar Bergman used in his movies that dealt with relationships, men with women, and how the desperation in their personalities either become their downfall, or a life lesson later on. In a sense, Carnal Knowledge is Nichols’ throwback to Bergman as was Interiors for Woody Allen, though his dealt with the strife in a family and Nichols is a character study dealing in love and sex.

Never-the-less, non-art film goers shouldn’t be scared off by the notion that Carnal Knowledge is bleak or sterile. It may not be the most cheerful, or an entirely fair to both sexes, but it is important in that it views Jonathan, Sandy, Susan, and Bonnie, as people, and Nichols doesn’t force the viewer to judge these people if they don’t want to. For its time it was groundbreaking, and today it’s almost mature compared to the barrage of “relationship” movies of late. And, if anything, it should have mass appeal to devourers of film acting. Grade: A