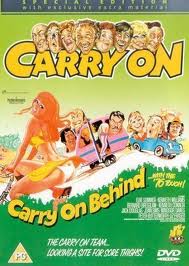 Carry On Behind (1975)
Not The Best But Certainly Not The Worst In The Series
CARRY ON BEHIND is a frustrating mix of both good and bad for those who have enjoyed at least some of the movies in the series . The movie starts with Professor Crump giving a lecture without realising someone has sent him the wrong film . On paper an academic narrating pornography would seem rather flat but here it raises a smile . Unfortunately after that the plot revolves around an inferior remake of CARRY ON CAMPING with most of the mediocre attempts at humour coming from a foreigner who has a poor grasp of the English language . There is avery funny scene involving a beach ball:

But there’s not too many more laugh out loud moments . Having said that CARRY ON BEHIND is far better than the movies that followed it in the franchise