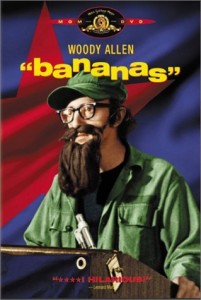 Not bad early Woody,
Woody Allen’s Bananas is a comedy of hits and misses. When it’s funny, it’s very funny and the film features a number of real stand out moments, such as the power mad general dishing out the new laws he’s made, and of course Allen’s neurotic dialogue, which is always a treat. However, at a number of moments; you get the impression that Woody Allen is trying to be funny, but he’s failing miserably, which only serves in being annoying. This is Woody Allen while he was still in his rather immature phase (everything before Annie Hall), and it shows by way of the rather ludicrous plot, which sees Allen losing he girl he is infatuated with, on the grounds of him not having leadership qualities. So, he goes on the holiday to San Marcos that the two of them were meant to go on, and somehow gets caught up with a group rebels there that are trying to provoke a revolution, and eventually becomes president. Hey, I told you it was silly!

In Woody’s immature period, he had several hit’s and misses, with Sleeper being at the foot of his filmography, and the wonderful Everything You Always Wanted to Know about Sex at the summit. This one is more hit than miss, but to call it an actual ‘hit’ would be lying. Basically, Woody doesn’t capitalise on the more interesting parts of the story, and instead seems all to keen to show us some slapstick humour.

Although this is funny at a number of times, this film could have been a biting political satire on how America deals with other nations, or maybe even how rebels fail once they come to power. It could have even been an interesting commentary on the superficiality of love. Maybe Allen could have outdone himself and gone for all three! Basically, this is a 7/10 movie where a 10/10 one could have been. Don’t get me wrong, this is definitely a good film and well worth watching, particularly for the Woody Allen fan; it’s just unfortunate that it came at a time when Woody was still a clown.

So-so,
Woody Allen plays Fielding Mellish, a timid New Yorker who goes to San Marcos, gets involved in a revolution and becomes head of the country!

Plays as bad as it sounds. It’s a very dated and surprisingly crude comedy. I’m giving it a 7 only because Allen is very good and there are quite a few truly funny moments. Most of them come in sequences where he’s paired off with ex-wife Louise Lasser (as the love interest). But the revolution section is unfunny (and the bulk of the movie), stupid and dull. Hard to believe Allen wrote those jokes! Still, it’s watchable. Look for Sylvester Stallone as a hood.

One of Allen’s lesser works.