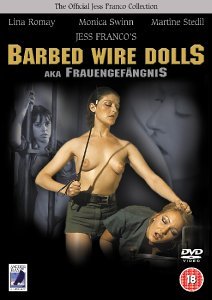 Review by Sven Soetemans
An expertise into the sleaziest corners of Euro-Exploitation,

Well, you can’t openly declare that you like (or even enjoy) watching this type of movies because then – let’s face it – you automatically get a stamp on your head that says ‘potential threat to society’. Barbed Wire Dolls is a non-stop series of sex and violence that explicitly focuses on female nudity and sexual torture.

The more reasonable reason to be interested in this film is the man who made it. Jesus Franco, the undeniable Godfather of sleaze takes on the ultra-controversial subject of ‘Babes behind Bars’ here. Franco is a remarkable director to say the least, with over 180 films on his repertoire as a director. Although this ‘Barbed Wire Dolls’ doesn’t come close to his best achievements, it sure is memorable. But not exactly for the right reasons…

The plot is thin to non-existent, it lacks range and feeling and there’s no tension to detect. Even the typical exploitation-music (a must for films like this) is absent. Compared to what you might think, it isn’t even THAT gross or nauseating. The film doesn’t feature sequences of extreme bloodshed or severe mutilation. Instead, Barbed Wire Dolls only serves a lot of naked female beauty and absurd characters. We have the lesbian guard with obvious Nazi-tics, insane prisoners and fraudulent authority-figures. Oh, and let’s not forget the falsely accused heroine and the remorseful male guard.

Actually, Barbed Wire Dolls looked ideal to supply with a neutral rating. Like 4 or 5 out of 10…but then it got entirely spoiled by the abrupt and idiotic ending. Really, it looks like Franco all of a sudden got tired of it and just said: ‘That’s a wrap’.

Maybe he had to hurry to another set…your agenda is pretty much filled with 180 movies to direct.