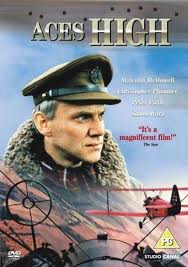 Aces High (1976)
Heavy Handed Anti-War Film,
First of all I feel I’ve got to point out the two flaws of ACES HIGH

1) The seventies film starts with the commonly held erroneous view that young men of whatever nation joined the army because they’d been brainwashed by glorious tales of daring do and had no idea of the horror awaiting them in the trenches. Not so in Britain at least since The Times newspaper published the names of every British serviceman killed at this time. One edition in July 1916 published over 20,000 names of the men killed during the Somme offensive, so to insinuate that the boys at the school had somehow only had Gresham’s account of the war to fall back on is somewhat naive. This might have happened in 1915 but not so when this film was set towards the end of 1916

2) ACES HIGH is based on the play JOURNEYS END except it revolves around a plane squadron which means when the chaps are at the airfield everything feels a bit too stagy while when they’re up in the air there’s a distinct lack of drama since the cast are indistinguishable with their goggle clad faces and their lack of dialogue
Having pointed out the flaws I can’t not mention the main strength and that’s the cast . Malcolm McDowell an actor I can’t usually stand at the best of times gives a superb performance as the bitter, cynical alcoholic John Gresham. It’d be very easy for McDowell to give a very over the top performance (some might say that’s all he ever does) but he’s both very convincing and disciplined here. Christopher Plummer is completely convincing as a paternal English officer (Plummer was always good at this kind of role) and Peter Firth – Despite being hampered with a character unsubtle written – is also good

Considering the limited budget the technical aspects are impressive enough with the sometimes slightly obvious back screen projection hardly bringing the film down. It’s an anti-war film so its heart is in the right place but like many an anti-war film it’s somewhat heavy handed (As I imagine the source play was) and the aerial scenes with their lack of dialogue means a somewhat over dramatic film in places and an un dramatic film in other places