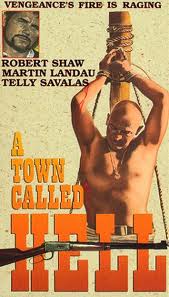 The problem with A TOWN CALLED HELL is that lot of things happen but none of them seem to tie in with the plot . The film opens with a bunch of Mexican revolutionaries attacking a town in 1895 then the story jumps forward to the same location ten years later where the revolutionary leader is now a priest and someone who the audience has no knowledge of rules the town in a similar manner to Mr Kurtz in HEART OF DARKNESS . A woman arrives offering a bounty for the body of the man who killed her husband . Other things happen that make little sense and the story is made even difficult to follow by characters continually appearing and disappearing . For example did Don Carlos live or die ? Your guess is as good as mine . We are also shown a lengthy flashback sequence and it only becomes obvious that it’s a flashback after the fact

This is a badly developed , badly edited and confusing movie but not one that is unwatchable . Indeed it’s a fairly entertaining movie if you can stomach the sadistic attitude and what a lesser film this would have been without Telly Savalas executing everyone who gets in his way with the most memorable sequence being the hanging scene . Just a pity we never find out his fate for certain . Also of worthy note is the sentry getting killed via barbed wire and LOVEJOY’s side kick revealing himself to be a mean assassin . Does this all sound very silly ? Of course but it’s also entertaining in a morbid sense.