Why Are The Seventies So Special?

This is the question I get asked so many times and I quite honestly don’t know the real answer.

Was it that the music was much better back then or could it be that growing up in the seventies without the pressures and responsibilities that adulthood brings, will always make those sun filled days seem better.

Or is there more to it than that.

The only way to find out is to tell you my story as I know it and let you decide for yourselves why the seventies are so special to me. 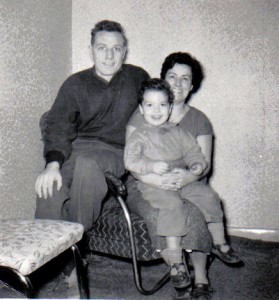 So let us go through the Arched window (always my favourite) and let me relate my tale.

At the time of my conception my family was living in Scarborough on the outskirts of Toronto, Canada. My parents and eldest brother had emigrated there few years earlier and my brother Barry was born there. From what my dad tells me it was a lovely place to live, in the winter fire engines would come around and shoot their hoses for an hour to make an ice rink for the people to skate on. Everything was idyllic until my mum became ill when she was carrying me.

From what I learned from my dad she suffered from a heart condition. and  advised by her doctor that she would have a better chance of living if she didn’t have me. Well she did choose me and consequently her health did indeed suffer. Towards the end of the pregnancy she got really bad and my dad had to sell up quick and move back to England as my mum wanted to come home.

I was born in February and my mum died in August. 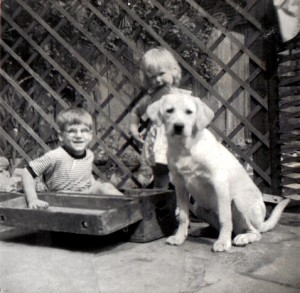 My dog Nanouk and my first girl friend... ok so I started early!!

As my dad was forced to sell quickly he couldn’t afford to keep us all together so my brother Barry went to stay with an aunt and I went into a couple of homes and then thankfully taken in by my Aunt Dorothy and Uncle Harold in Hackney.

It was here that I spent my first years of growing up, eating winkles and cockles on  sunday evenings., watching The Monkees with my sister Christine and playing with our puppy labrador Nanouk which my Uncle bought to help him with his hunting. Now Nanouk had other ideas when it came to exercise for when my Uncle first  took her out and shot a duck down Nanouk just looked up at him as if to say “you don’t expect me to go get that do you?” She never went with him again.

I can remember lot’s of wildfowl pies and rabbit stews whilst living there and of course my favourite, stewed eels and mash made by my Aunt Dorothy.  We used to go out fishing for them with my new ‘brother and sister’ Richard and Christine. I have to explain here that I was never told about my real parents at this time so I thought they were my family and so they were. My “brother” Richard was a lot older than me and I thought he was God, I stood in awe of him and can remember stealing his things and hiding them under my pillow. Not because I actually wanted them but because they were his. I can also remember my sister Christine making me a lovely teddy bear which I loved and treasured for years and having rows with her dad becaue he wouldn’t let her watch the Monkees.

I only have good memories from there. Playing with my kaleidoscope when I was sick with chicken pox. Even when I was naughty and got sent to my room  I can remember climbing out the window and shinning down the drainpipe to play in the garden in my favourite treasure chest. Oooh I was a naughty boy.

It was 1967 when Harold and Dorothy took me on a drive to Leyton. I can remember pressing the button in the lift to take us up to the ninth floor.

My family was finally together.

Catching slippery eels with my brothers and cousin Richard

I can’t remember much when I found out my Uncle Fred and cousins Mike and Barry were actually my dad and brothers. Was I happy to find my real family or was I sad to see my surrogate family go? I really can’t remember much of those years. I know they weren’t very happy times due to the tormenting of my two brothers. I was the youngest and last one in so they had already joined ranks against me and I did suffer badly at their hands.

But slowly things got better and there were new things and places to explore and I had a new brother only 18 months older than me to play with. We were the great adventurers going fishing at Cooks Ferry and The Hollow Ponds. Frogging in the ‘LoonyBin’ a disused swimming pool in Whipps Cross Hospital that allegedly had mental cells underneath. Conkering and scrumping, playing run-outs and football, swimming and saturday morning pictures. 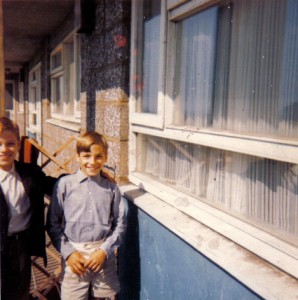 On the balcony of St Pauls in Leyton, must have been going somewhere special check the creases in my new shirt!

We were wild street kids, unfettered by parental control. The world was ours to explore and explore it we did. We were very inventive making our own toys from go-carts and skateboards to the mighty Tank. If we needed money we’d do a Corona bottle hunt for the deposits. We never had much money but I don’t recall us complaining. We used to have family parties every Christmas with decorations up that we had made ourselves, listening to 45’s on the suitcase record player with it’s arm loaded with pennies to stop it from jumping. Trying to hide from my nan who would totally out-dance everyone on the floor and have a sing-a-long to my dad’s piano playing and doing the March of the Mods.

It was my brother Mike who first got me interested in pop music. He used to buy his singles on a Saturday morning and I’d wait for him to come home to play them on our little suitcase record player. I can always remember his wise words when I told him I thought Steve Harley was rubbish because he couldn’t sing. He told me ‘nothing is rubbish if someone likes it’. From then on I listened to music in a whole different way.

Friends came and went, Steve Fordham was my right hand man in many of our escapades some of which I cant talk about until the statute of limitations runs out. We’d fish down Tottenham Locks and go adventuring together though I don’t understand why we did get on because he used to enjoy me being in discomfort especially the time when we got caught scrumping in someone’s garden and a dog was put on us. Steve flew over the wall but I struggled being a little bit smaller.

I was there, trying to pull myself up over the wall with a dog hanging on my trouser leg. I think Steve must have been close to wetting himself that day.

Me. my brother Barry and "step mother" a couple of street urchins indeed

We had joy we had fun we had seasons in the sun but it was a sad day when he moved up to Burnley and my dad wouldn’t even let me have a sleepover for his last night.

Life was good for many years until my dad met someone and got remarried.

With her came three more boys. Can you imagine it ? Six boys in one house.

The worse thing about this move was that I had to share a room with her youngest and he was a handful with a very quick fiery temper. I can remember coming home and finding all my stuff thrown out the window and laying in the back garden with my treasured teddy bear impaled on the garden fence.

These were hard times for me and my brothers as she ruled the roost and the stereotypical step-mother held court.

Things weren’t all bad though. We generally got on with the brothers Steve, Graham and Colin, the youngest., but the bonus was the friendship of Gary the kid from next door.

Out of all the years living there the best year has to be 1976.

It was the year when the sun didn’t stop shining all summer and the holiday we had down in Looe, Cornwall was the best holiday I’d ever had. Cornish Pasties were food of the god’s and a sweet romance blossomed. Everything was just going great. Gary and me spent all summer catching the 69 bus to Beckton lido with our crew playing about in the pool, and to cap it all I’d finally managed to get back in touch with my old pal Steve and arranged a trip up to Burnley for Christmas.

It was so new and exciting traveling up there on the National coach as I’d never been away from home on my own before. When I arrived Steve was there waiting for me and the welcome I got from his mum and family almost made me cry.

We partied all over the place and it was like being a celebrity with the girls all asking me to say different words in my cockney accent,. You didn’t hear me complaining. I remember one party in particular because they stopped it to watch Starsky and Hutch!

We danced away to Leo Sayer and Showaddywaddy, and drank some dodgy Party Seven beers.

The Christmas week culminated at the Cat’s Whiskers for New Years Eve and we danced all night to the likes of Rose Royce and Candi Staton finishing the evening off with John Christie’s  Here’s to Love.

So getting back to the question why are the seventies so special to me?