So there we have it, I had got myself my first ever girlfriend and not even John Hale, our leader had one so I felt good and very proud about the whole thing. When the idea of actually having a girlfriend began to sink in I started to get a little nervous because I had never had a girl before and I was extremely shy and reserved. Chris on the other hand was totally opposite to me. He was outgoing, confident, older, and as mad as a March Hare. We came from very different backgrounds. Chris had lived in America for a while with his parents and his little sister Marcella. Chris’s dad had a good job; he worked on a ship as a radio operator but had to return to the UK when he became ill. Chris was 15 at the time and I was 13.

Now we had these girlfriends I thought, what an earth are we to do with them. They couldn’t play football or anything like that. I wasn’t so sure that they would fit in or be accepted by our friends because they were girls. So in the end we split from our friends and did our own thing. There were no youth clubs in the area at the time so we began to roam the streets and play on the swings on the Fairfield. I seemed to remember we did this quite a lot and one night we actually saw a meteor or comet shooting across the night sky (I never did know what it really was!). We thought it was a star falling out of the sky, a shooting star. That was the first and only time that I ever witnessed this beautiful celestial sight. At first we walked everywhere and it always seemed to be at night. Across the golf course at Fearnhead, round the estate where we lived, we just walked and walked and chatted, Chris would show off in front of Spix and I would chat away to Gabs whilst being linked all the time by this lovely girl. 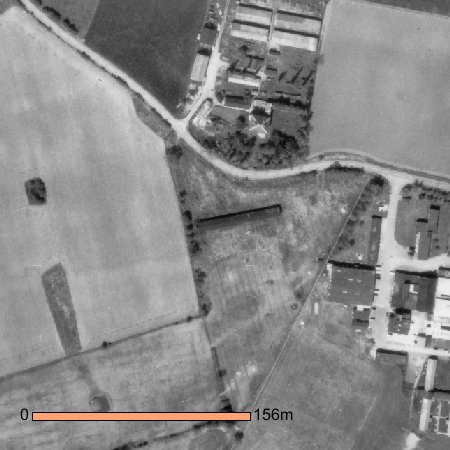 The black oblong shape in the centre of the photo is the hut where we went in search of ghosts (Aerial photo of Crab Lane, Fearnhead 1970s)

One of our favourite places where we would go wandering was Fearnhead Golf Course (Sadly now re- developed and built on). In a remote corner of the course at the Crab Lane end there was a huge hut. It was about 100 yards long and was painted green. One day we decided to enter this long hut and explore it, I think we intended to find a ghost or something, anyway we entered by a door at one end. When we got inside we became aware that it was quite dark, all the windows had been painted over, and I assume the reason for that was so people couldn’t see inside. On entering we all had a feeling of foreboding and it felt extremely spooky, I could tell my friends were scared because of their faces, they looked terrified. The inside was divided into about 8 sections with a door in the middle allowing access to each part of the building. As our eyes adjusted to the dark we became aware of our surroundings. It contained what appeared to be old bits of junk from days gone by; machinery, sacking, old tools, barrels, seeds and a lot of rubbish, everything seemed so old and rusty and no longer used.

We were extremely scared but carried on exploring because Chris and I didn’t want to appear scared in front of the girls. We pretended we were brave but we weren’t, inside we were terrified (well I was). The girls wanted to leave and were looking more and more scared as we pressed on but we boys were having none of it. Then we heard a noise that startled us and we ran out of the hut as fast as we could with the girls following a long way behind us.

This wasn’t the only time we entered the building, we went there on other occasions too.

About the fourth or fifth time we went was to be our last. On this occasion we were about to enter the building in the usual way, but as Chris opened the door slowly, to our horror there was a woman stood behind it. She was dressed in old fashioned clothes and her hair was parted in the middle as was the fashion in the olden days. Talking about hair, the shock of the woman behind the door made mine literally stand on end and we all ran as fast as our legs could carry us (the girls were far behind again). When me and Chris were at a safe distance I looked back and the woman was still standing in the doorway looking at us as we fled. The strange thing is the women never spoke or made a sound, she just stood there staring. We never ever went near that building again.

In 1973 the Croft interchange was being built and we would walk there after school and play on the newly constructed motorway, balancing on the white lines in the middle as though they were a tight rope. I once said to Gabs, “What happens if we fall off”, to which she replied, “You go back to the start”, which I thought was quite funny. All this was good innocent fun and as the weeks went by I grew more and more fond of Gabs and we saw each other every day.

Most Sunday nights my parents went out so we came to my house and listened to records and play hide and seek with the lights out. No wonder the game lasted for ages, nobody could ever find anybody! Chris’s parents too went out quite a lot so when that happened we would go to his house and do pretty much the same.

After several weeks of this we decided to do something different; the four of us decided to go to Blackpool for the day on the train. This was the first time I had ever been out of Warrington without my parents and I thought Blackpool was at the other end of the universe. We boarded the train at Warrington Bank Quay Station. The train was very old fashioned. We had a carriage to ourselves so me and Gabs were facing Chris and Spix and we felt really posh and grown up. The journey to Blackpool seemed to take forever but when we eventually arrived the first thing we did was head for the fun fair. I have little or no recollection of our adventures in Blackpool but I do remember going to the railway station to catch our train back to Warrington. I asked the guard where the train to Warrington was and he pointed to the train and platform.

We made our way onto the platform and as the train was just about to leave we jumped on board and settled ourselves down. After a while it soon became apparent that we were on the wrong train and we had no idea where we were, we were lost. To this day I have no idea where we ended up but we were nowhere near Warrington. As soon as the girls realised that we were on the wrong train they began to cry. I tried to calm them down and console them and told them everything would be alright but they were very upset. We eventually told a guard on the train of our predicament and he was very kind. At the next station he took us off the train and came with us on another train back to Blackpool. Not only did he travel back to Blackpool with us but when we arrived he asked us to point out the guard who had put us on the wrong train. This I did and the other guard had words with him and a bit of a commotion ensued. The bad guard was having none of it and did not look at all happy about being accused of putting four children on the wrong train, but I know he did. Anyway, to cut a long story short we were put on the right train and finally returned to Warrington Bank Quay about midnight. I bet our poor parents were out of their minds, no mobile phones in 1973.

We carried on courting and doing pretty much the same things for the next few weeks until one night Chris decided to throw a party at his house as his mum and dad were going out. There was a lot of alcohol there. Gabs and Spix were there and many of my other friends were there too. Many of us got drunk that night including me and I had to be walked round the estate to try and sober up, in the end my mum had to collect me and take me home, not one of my best moments.

Due to this act of selfish and childish stupidity on my part Gabs and Spix left the party early and I never saw or heard of them ever again.

Growing Up In The 70s

I'm very lucky to have so many friends that love the 70s and some that have shared their memories with us. It's interesting to see there was little difference between the USA and UK but from reading these stories one thing does come through, technology. It seems to all the people lived through the 70s the technology of today seems to have taken the personal, community spirit out of life. It's taken us years to get this site together so we would love to hear your feedback in the Facebook comment box.