Blue John Mines
I was probably about 9 or 10 years of age at the time and there were roughly about 30 or 40 other children and a couple of teachers who accompanied us on a school trip to Blue John Mines in Derbyshire. It was always such a thrill and usually very noisy on the coach wherever we went.

I remember very little about this particular adventure but I do recall going down the mine and a guide came with us explaining the various geological aspects of this cavern. We were also told that Blue John, was a very rare mineral and could only found in that part of the world which made the whole experience even more exciting. I remember being very impressed by some beautiful rock formations and other wonderful sights that confronted me as we toured this underground labyrinth. 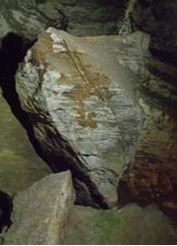 In particular there was a huge boulder, called the Balancing Rock, that appeared to be balancing quite precariously on a very tiny axis point, It seemed that if you blew on it, sneezed closely near it or walked past too quickly the boulder would come tumbling down and that would be that. We were told that it had been balancing on a three penny bit for about a million years and we all believed it.

After about half an hour or so we found ourselves in a particularly lovely place, a cavern which had a very flat floor. We were all told to gather round in a group, which we did. We were looking up and around at this beautiful environment admiring these wonderful rock formations when all of a sudden the lights went out. We were suddenly thrown into total darkness, It was so dark that you couldn’t see your hands in front of your face. After a few moments there was a loud rumbling sound that got louder and louder, our environment began to shake and vibrate, it felt like the whole cavern was caving in and rocks and boulders sounded as though they were on the move and coming towards us.Then a thought suddenly struck me with dread and fear, it was the Balancing Rock on the move, somebody had walked past it too quickly or sneezed on it and now that it had been disturbed after millions of years of balancing on a three penny bit. We were right in it’s path it was coming down heading for us and there was nothing we could do! we would all be crushed; we were all doomed.

The girls started to scream, some of the boys did too, then after a few moments of complete terror the lights came on again the rumbling sound had ceased and as my eyes adjusted to the light I could see that the girls were crying and some boys were too. Peter Moores was very upset and had to be consoled by a couple of teachers. I then had a good idea that we had been the victims of a practical joke by staff from the mine and the teachers were in on it too, we had been set up. It was quite funny really but Peter Moores and the girls were very upset by it, in fact Peter was beside himself and never really got over it. To this day he suffers from nightmares and flashbacks.

After the tour had ended, we ascended back to the surface via some very steep steps and ended up in the souvenir shop. I was lucky enough to have some pocket money and bought a very small sample of Blue John stone, which was sealed in a very small packet. I think we probably had lunch there and then we went by coach to a small Derbyshire town, it may have been Castleton and I can remember seeing wells and other monuments decorated with flowers, it all looked lovely, Mr. Hunt seemed to take a lot of interest in these lovely decorated wells and things.

The journey home that day was however, as memorable as the visit to the cavern itself but for a different reason. Our ages ranged from 8 to about 10, and on the way home we were all singing the usual childhood coach songs such as, Ten Green Bottles (Hanging on a wall), One Man Went To Mow (Went to Mow a Meadow), My Eyes are Dim I cannot see I have not Brought my specs with Me, and so it went on.

Some time into these songs I became acutely aware of an awful smell emanating not a million miles from where I was sat. I was puzzled at first and said to whoever it was I was sat next to, what’s that Orrible smell? Then next thing I noticed a stream, of what looked like mushroom soup flowing from under the seat in front of me towards my feet. I took evasive action and immediately tucked my feet under my bottom to avoid being covered in this strange substance, and it smelt awful. What was it?, How did it get there? But it soon became apparent that the boy who was sat in the seat directly in front of me had been sick. I wont mention the boys name, I would never embarrass the lad, but Arthur Nicholas had been as sick as a dog and I was about to be engulfed in it (Or so I thought). I can still smell it now in my minds nose after all these years, but apart from that it was a very nice day out.

Growing Up In The 70s

I'm very lucky to have so many friends that love the 70s and some that have shared their memories with us. It's interesting to see there was little difference between the USA and UK but from reading these stories one thing does come through, technology. It seems to all the people lived through the 70s the technology of today seems to have taken the personal, community spirit out of life. It's taken us years to get this site together so we would love to hear your feedback in the Facebook comment box.