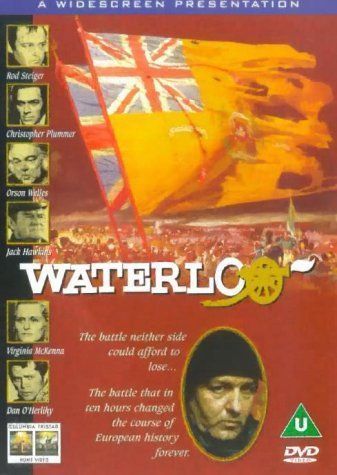 Waterloo (1970/I)
This has got to be one of the worst directed epics I have ever seen . Moments into the movie we see an almost sublime jump cut close up of Napoleon`s eye as he talks to his right hand men . I`ve no idea what this was to signify . I guess that perhaps director Sergei Bondarchuk was a fan of spaghetti westerns
And as the film goes on the more I found myself asking what the hell the director was doing . Did Mr Bondarchuk ever read a history book ? Did he ever read ANY book . Come to think of it have the people who are praising the movie at this site been watching the same movie as me ?

There`s several films called WATERLOO and I`m commentating on the one starring Rod Stieger as Napoleon and Christopher Plummer as the Duke Of Wellington – I`ve no idea what what everyone else has been watching because this is only slightly accurate* script wise – totally inaccurate visually . For example Wellington picked his ground well after a rain storm to lessen the effect of French cannon fire ie the wet ground would cause cannon balls to stick in the ground but according to this movie not only did French cannon balls explode like a bomb but they also exploded into fire balls. Look at the battle scenes where there`s literally hundreds of fireballs from cannon fire , it looks more like a napalm strike from APOCALYPSE NOW rather than a great battle from 1815 . Let me just repeat that cannon balls in those days were made out of solid metal . They weren`t filled with explosive so they didn`t explode and jellyfied petrol (Napalm) hadn`t been invented yet so no fireballs either.

I also can`t help noticing how badly edited the fight scenes are . In fact they resemble those seen in the John Wayne debacle THE GREEN BERETS and it`s often difficult to make out what`s going on . If you`re going to have a spectacular battle might it not help that the audience can see what`s happening ?

* I`ve got to be pedantic and criticise the numerous times the red coats are called ” The English Army ” , it`s actually The British Army . Considering there`s umpteen times Scottish bagpipes are heard I thought someone would have realised there`s a difference between the two . Oh and the British Army was led by the Duke Of Wellington on that day who wasn`t an Englishman as referred to here but was in fact Irish born