The Ultimate Warrior – 1975
A Film of the Future 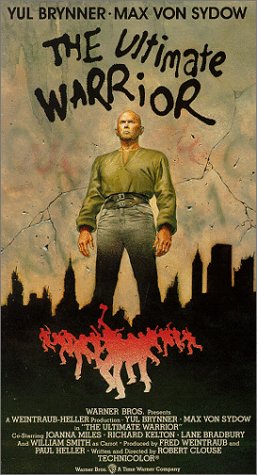 The Ultimate Warrior (1975)
The Sadism Made It Enjoyable,
This would have been improved greatly if the scenario had been developed more . The world has been devestated by a plague/famine sort of apocalypse and the survivors have to kill to keep on living . In many ways it`s the sort of premise seen in the works of John Christopher especially THE DEATH OF GRASS and PENDULUM , but unfortunately the causes of this world disaster are never fully explored , and I also guess not having Rudy Giuliani as Mayor of New York didn`t help the situation .

Of course being an American survivalist drama the story concentrates on action and violence unlike the genre`s more thoughtful British counterparts , and this is where THE ULTIMATE WARRIOR comes into its own . The film starts with a stabbing but it`s done with a certain amount of novelty . There`s also countless more stabbings in the movie not to mention umpteen scenes of people getting thrown off roofs but check out this scene of cruelty :

Bad Guy : Anything else you want to tell us ?
Traitor : No . AAAAAAARRRRRRGGGGGHHHH
Oh nasty