The Taking of Pelham One Two Three

The Taking of Pelham One Two Three – 1974
We are going to kill one passenger a minute until New York City pays us one million dollars.
D 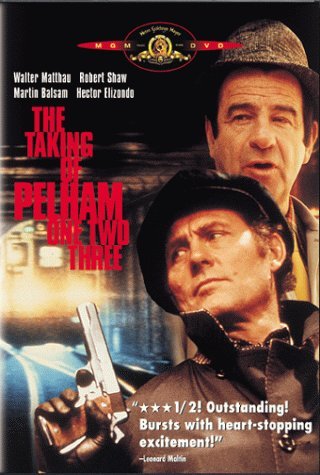 “Gesundheit”
The Taking of Pelham 1-2-3 is not one of my favorite sort of hijacker-type thrillers, but it is a professional type of film that gives its audience what it wants on a base level; stone-cold and (perhaps) crazy criminals taking over the wheels, literally; a group of frightened, but realistic, passengers held hostage; cop characters who are smart, and sometimes funny. One can see what must have appealed to Quentin Tarantino for Reservoir Dogs, which he kind of raped & pillaged for his screenplay (not just with the color-coded character names, but also certain aspects of the criminal characteristics, and a little detail about a undercover cop). On its own legs, Taking of Pelham is also sort of a trend-setter; one can also see the influence on the original Die Hard, and other countless B-grade or less thrillers. But the circumstances in the story, the acting, and indeed some of the humanity, bring it up a notch.

The story is hard-boiled, but is surrounded by realistic dialog for all involved. When there is humor, its unexpected, but worthwhile. We are given a group of consummate criminals, with Robert Shaw (Mr. Blue) as the steel-eyed, no non-sense leader of the four, who take a subway train with twenty or so passengers hostage. At first the subway company man goes nuts over it, until Lt. Garber (Walter Matthau, a surprise but interesting casting choice) overhears the situation. He becomes the negotiator, having to go between then and City Hall for the ransom money. For a while in the story, until the train starts to move again, not much goes on, but what does go on is meticulous, and therefore even more suspenseful.

There are funny characterizations of those who in lessor crime films wouldn’t have much to them, like the second-banana to Garber, played to me as a total surprise by Jerry Stiller (one may rewind to check again), plus a couple of notables in the Mayor’s office like Tony Roberts. And there is of course Shaw, who gives the kind of performance that’s a given if you’ve seen Jaws (though Jaws is his best). Martin Balsam is very good as the older one of the bunch. Hector Elizondo, with an excellent character-actor career nowadays, is perfect as the un-hinged Mr. Gray. But one thing that is very effective is the cast of those who are held hostage. The director Joseph Sargent knows how to get more interest than in just plain caricatures in them. These are real people, and the audience’s interest in their survival is more prominent by the little details that are put in-between the phone tag with Garber, Blue, and the flu-stricken Mayor.

There is a sort of expected outcome for what will happen to the villains of the story (and if you’ve seen Reservoir Dogs before this it might give some of it away), however the grittiness of the story becomes only firmer in the climax; the fates aren’t etched in stone, like in the best of the heist pictures of the 40’s and 50’s. Basically, as a genre picture, you could do a lot worse, even if it isn’t necessarily a great movie- it’s un-pretentious, New York film-making of a truly 70’s order.

Great thriller,
Four men hijack a subway car full of people. They demand $1,000,000 from NYC in 1 hour…and they’ll kill a hostage for every minute it’s late.

I saw this back when I was 12…my dad took me to see it (it’s R rated). I loved it back then and, I’m glad, to say, I STILL love it now! It’s extremely well done–full of suspense, action and violence. It isn’t really an actor’s film but Walter Matthau does as good as can be expected and Robert Shaw is excellent as the cold-blooded head villain. The movie has tons of swearing (that alone got it the R), offensive stereotypes and gleefully politically incorrect dialogue and jokes. But you’ll be so caught up in the story you probably won’t be bothered by it.

This is an exceptional 1970s thriller that, sadly, is virtually forgotten. However, it’s nice to see a brand-new print of this is making the rounds. See it if you get the chance!