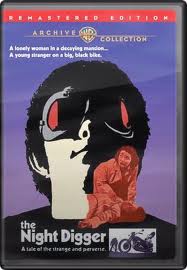 Another one of those great forgotten movies of the 1970s. I caught this on late night TV about 20 years ago and have never forgotten it.

It was about a young man (Nicholas Clay) helping out Patricia Neal and her elderly mother in England. Neal starts to fall for him (despite their age difference)…but she’s not aware of what he does when he goes out alone every night…

Spooky little horror film. It was edited for TV so there were some unexplained pieces (like a bit about something that happened to him as a child which explains what he does as an adult) and, I assume, violence was gone. But the acting was very good (especially by Neal and Clay), the story really spooked me and it was totally absorbing. Also the ending was a stunner! Sadly this film is not available on video or DVD (I’d love to see the uncut version someday). So, if you get a chance, see it. It might disturb you but you’ll never forget it.