The Horror of Frankenstein 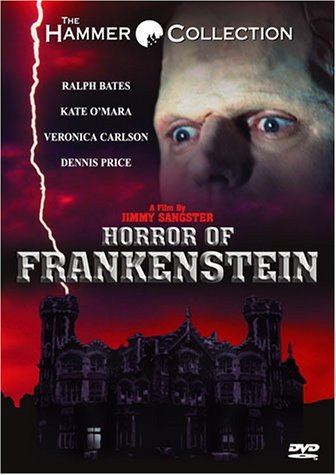 Different approach divides Hammer Horror followers but it’s not without merits
The Horror Of Frankenstein is out of Hammer Studios and directed by Jimmy Sangster. Based around the famous characters created by Mary Shelley, the screenplay is co-written by Sangster with Jeremy Burnham. It stars Ralph Bates, Kate O’Mara, Veronica Carlson, Dennis Price, Graham James & David Prowse.

After a dastardly deed sees him inherit the family estate, Victor Frankenstein continues with his anatomy experiments……

Originally released as part of a double bill with Scars Of Dracula, The Horror Of Frankenstein saw Hammer Studios take a different approach with the titular monster. Gone was Peter Cushing, who in a publicity shoot was seen “handing over the reins” to the next generation, and in came a more comedic and talky take that takes in the permissive society and the British Welfare State! Sangster’s movie should be viewed as a comedy with horror elements, it’s clear from the outset that the makers here have tongue firmly in cheek. What else can you derive from a film that has a dismembered hand flicking the V’s? Or a casual observation that Kate O’Mara has gained weight in the breast department? I kid you not, and it is damn funny.

The most interesting thing about the film is the young Frankenstein himself, perfectly essayed as being a dandy egotist by Bates. He is in fact the villain of the piece. Here is a man who kills innocents with single minded glee, just so he can create life; deliciously bonkers really. The sexiness comes from O’Mara and Carlson who seem to have entered a “who has got the biggest cleavage contest”, while Dennis Price of Ealing fame is wonderfully colourful as a grave robber happy to let his wife dig the graves! Yes it’s a wacky movie alright. Even the monster, played by future Darth Vader David Prowse, seems to be in on the joke. Throw him a doggy chew and he’ll do anything for you. I think the creature was more irked about having to wear a diaper more than anything else.

Sets and costuming are still of a high standard, but this is a different Hammer Frankenstein. Fun and even a little devilish in its writing, it’s not, however, one for the scare purists. 6/10

I never thought a Hammer Frankenstein would let me down
This movie turned out to be a milestone for me as well, but not a very positive one. I’ve seen 5 Hammer productions so far concerning the topic of baron Frankenstein ( this one not included )and they were all much better. In fact, some of them belong to my ALLTIME favorite horror movies. This version, directed by Jimmy Sangster, is inferior and ten times as boring as all the others. The fact that the legendary Peter Cushing doesn’t star as Victor Frankenstein didn’t help the film very much neither…

I have to be fair and admit that the movie has a few good moments and several positive aspects. In fact, the whole second half is ENJOYABLE but it never reaches the usual Hammer level and it seems to take hours before something happens. I still can’t believe I sat through till that moment. Several times I came close to pressing the ‘eject-button’, though. The biggest difference ( and failure ) between this version and the true classics is the character of Victor Frankenstein.

The baron is portrayed as an egocentric and precocious basterd who doesn’t care about anything or anybody. I got the idea that he doesn’t even cared about science…he just wants to create life in favor to increase his own status and to help him get rid of people who stand in his way. He doesn’t even dig up the bodies to experiment upon himself !! He talks with a very annoying tone of voice and he’s too rich in my opinion. That’s never good…Normally, I like arrogant characters but this one had something missing…Maybe it was the performance by the rather unknown actor Ralph Bates. He also played Dr. Jeckyll once in a Hammer production, but I didn’t see that one. The ONE thing I didn’t understand about him was: He’s being worshiped by two of the most beautiful women alive and he totally doesn’t care. A man’s lifework is important but still,…a bit of lovin’ is always pleasant, no ? Especially the actress named Kate O’Mara ( she plays Alys, the housekeeper) is gorgeous ! I think she was the main reason why I couldn’t force myself to press the ‘eject-button’. I assure you, she’s a very beautiful woman.

When the monster is ( finally ) created, it looks pretty dumb. He looks like a popular football player ( except for the head ) and he eats pigeons !! This movie was shot only one year after Boris Karloff’s death and he ALREADY had to turn over in his grave!! Otherwise, there’s nothing to worry for him…he’ll always be the one and only “Monster of Frankenstein”

On a more positive note: I really the abrupt ending to Horror of Frankenstein. The last 15 minutes are really good and the whole last setting in Victor’s attic is a powerful scene. If only Sangster had been able to create this atmosphere during the whole movie !

Precious “rewind”-moment: Baron Frankenstein is having supper with Prof. Heiss who’s trying to make conversation with him. While Heiss is talking, the only thing Frankenstein can think is Heiss’ brain which he needs to finish his creation. Satisfying scene in an overall disappointing movie…