The Duellists – 1977
Fencing is a science. Loving is a passion. Duelling is an obsession 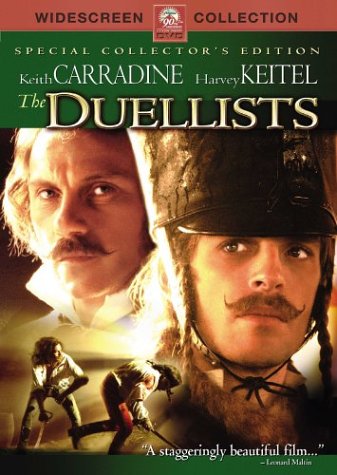 · Set during the grand, sweeping Napoleonic age, an officer in the French army insults another officer and sets off a life-long emnity. The two officers, D’Hubert and Feraud, cross swords time and time again in an attempt to achieve justice and preserve their honor.

Up there with CITIZEN KANE as a debut directoral effort
Ridley Scott’s absolutely commanding first movie outing as director. (He had previously helmed a few brit TV series including the award-winning Z-Cars!)

Set during the Napoleonic wars, the tale is of a long-running vendetta between Carradine and a wholly dislikable Harvey Keitel. The snow has never been colder, the backdrops more dramatic or the protagonists more committed! Images of the duellists stripped to the waist, the blood an impudent red intruder against the virginal scenery, sear themselves on the thinking viewer’s conscience. Many pointers here as to how GLADIATOR became the film it did almost a quarter of a century later!

Ridley Scott with free artistic reign in this picture conjures up a fascinating movie that simply has not aged, possibly on account of its historical setting. For anyone who is a devotee of Ridley Scott and yet has never seen this film, there is something here you most definitely should be attending to!