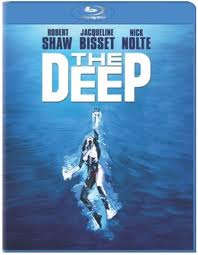 Beautiful but slow and exploitative,

A young couple (Nick Nolte and Jacqueline Bisset) find some unusual coins and ampules while diving underwater. Soon they have a sadistic drug dealer (Louis Gossett Jr.) after them but are helped by an island expert (Robert Shaw) on what they might have.

There are so many things wrong with this it’s hard to know where to begin. For starters the story is unbelievable to a large degree. Bisset’s body is also horribly exploited–she’s introduced for the first 10 minutes in a wet T shirt, is later forced to go topless and then is sexually molested in a sick voodoo ritual.

Bisset was (and is) a beautiful woman with great acting talent–she deserves better than this. Nolte is terrible in his role–but he didn’t like doing the film anyways. It is interesting to see him so young and pumped up. Shaw is just great in his role. Gossett has the evil villain part–he does what he can. Also this film has some pretty extreme violence–some of the scenes even made me flinch. How this got by with a PG rating is beyond me. Also it’s so slow! The underwater scenes, beautiful as they are, weigh the movie down and the plot gets needlessly convoluted. I was fast-forwarding to get through some parts.

Beautiful underwater photography, a lush score, stunning locations and good acting from Bisset and Shaw can’t save this. The sexual material, violence and ridiculous slow story really destroy this. Read the book instead. I give it a 5.