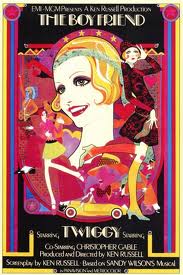 Boy, I REALLY wanted to like this…but I didn’t,

Ken Russell’s spoof on Hollywood musicals (and probably his only G rated film). In the 1920s an assistant director (Twiggy) for a tacky theatre company, falls for the leading man–handsome Tony (Christopher Gable)…but he doesn’t seem to know she exists. Also she has to take the lead in the musical they’re putting on because the lead actress (Glenda Jackson) has broken her leg.

I love musicals and Russell is one of my favorite directors–but I really didn’t like this. It has beautiful, elaborate production numbers (obviously inspired by Busby Berkeley)–most of them are just jaw-dropping and the songs aren’t bad but this movie has numerous problems.

For one thing it’s way too long (138 minutes). I can see why 25 minutes were originally cut when this premiered in the US in 1971. And the main stars are all wrong for the roles–Twiggy is no actress and even her SINGING was off! She hit a few sour notes that were just painful. Gable was even worse–tall, handsome and utterly blank. Even Tommy Tune registered nothing. Only Jackson comes through in a truly funny cameo. And good luck with the English accents.

As I said, the musical numbers were dazzling with incredible dancing and there were a lot of them–TOO much! They’re practically nonstop and I was exhausted by the time the movie was over. You’re constantly being hammered by the music and sets–there’s never any time to just stop and take a break.

And the constant over head shots during the numbers just got annoying. Also there’s a LONG, pointless musical sequence in a forest which come off as (unintentionally) hysterically bad. Perhaps Russell was the wrong director for this–this excess worked for “Tommy” but that was a whole different type of movie.

I REALLY wished I liked this—but I can only give it a 7.