Tenderness of the Wolves

Tenderness of the Wolves – 1973
aka Zartichkeit der Wolfe, Die 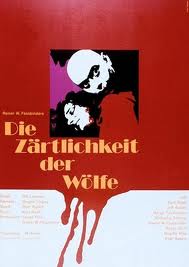 Never thought a film about a gay cannibal could be dull but…The movie IS well-done. It’s well-directed, the acting is great and it has a creepy, unsettling atmosphere (as it should). It just gets bogged down, people acted REAL strange at times and just was downright dull!

Still, it all happened and the film has artistic merit. There just wasn’t enough material for a feature length film.