Shock Waves – 1977
Once They Were Almost Human! Beneath the living… Beyond the dead… From the depths of Hell’s Ocean! The Deep End of Horror! 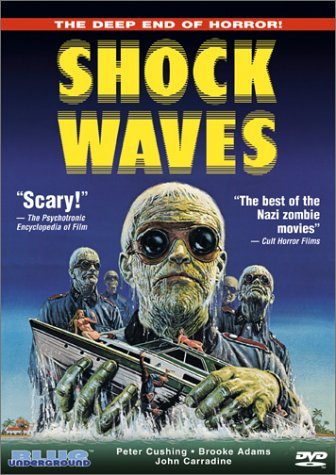 The reason why this underrated cult gem is so unappreciated (almost hated) probably is because most people don’t have enough imagination to really enjoy a flamboyant tale like Wiederhorn’s “Shock Waves”. The plot and make-up effects might not be very convincing but I assure you that the film makes up for this in atmosphere and goodwill.

Even though the makers didn’t have much to work with, suspense is created by a horrifying electronic score and viciously bleak locations. It already starts out terrific, with an eerie voice-over informing us about the despicable experiments of the Third Reich. Hitler & Co supposedly formed a bloodthirsty zombie squadron that never stopped battling their opponents. Without weapons and appearing out of nowhere. When the Germans were close to losing the war, SS commander Cushing exiled along with his troop to a tropical deserted island. For some (rather unexplained) reason, they arise after forty years and go after a group of tourists.

Shock Waves features long shoots of swampy wastelands with the Death Corps constantly lurking…Okay, the murder sequences are bloodless, tame and rapidly paced. We’re even denied some of cast members’ death and yet you still forgive them for it. The few special effects it does feature are nauseating is a very subtle way, like the decomposing of an undead exposed to the sun. Even though this production credits Peter Cushing and John Carradine as the major stars, their screen time is merely limited to remarkable cameos. Still, Cushing rarely looked so creepy with the giant scar and famishing appearance. Cushing’s role just states what an unpretentious and versatile actor he was.

The premise of experimental Nazi-zombies was repeated a few times but rarely as efficient and scary as here. “Death Ship” was rather sublime, probably because it was driven by atmosphere as well. If you truly are a horror lover, you simply have to see “Shock Waves”! It easily joins the endlessly long list of severely underrated 70’s treasures. As weird as it may sound, the image of zombies slowly walking out of the water feels intriguingly realistic.