Papillon – 1973
The greatest adventure of escape ever filmed! 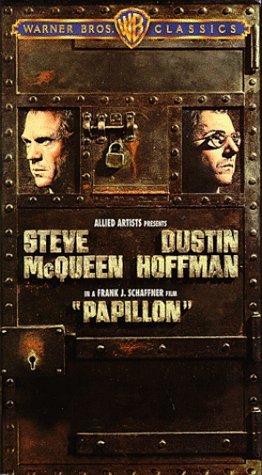 Henri “Papillon” Charrière was a crook, a bad egg, he however was sent to the notorious, inescapable, prison fortress of Devil’s Island for a murder he didn’t commit. The film, as is the book, is a fictionalised account of Charrière’s time at the penal colony.

The film is probably best described as being a stirring drama of friendship under duress, endurance and opportunism, all neatly blended with an adventure based heart. Schaffner directs it with great technical skill, for in a film with minimal dialogue, he manages to perfectly stifle the viewer with a hot sweaty atmosphere. Something that is crucial for us to feel the confines of this penal colony life. These men are doing hard time, lets not soft soap it Hollywood style, lets get the feel right, something, that much like Don Siegel also did in 79 with his excellent Escape From Alcatraz, Schaffner does exceptionally well. He is helped enormously by two fabulous performances from McQueen & Hoffman.

McQueen is in his element as Papillon. Always an actor whose ability for dominating scenes without using histrionic acting was undervalued, Papillon goes some way to readdressing the myth that he was more about iconography than actual talent. His solitary confinement scenes are sublime, without saying barely a word. As Papillon stave’s off starvation, madness and disease, McQueen has such a powerful and believable presence, he pulls us into that five by five paces cell with him. Incredible! Once again tho the Academy ignored McQueen’s excellent work and the film only received the one Oscar nomination for Goldsmith’s pinging tropical score. Hoffman’s great work was something of a given, meticulous as usual in his preparation {he had studied for weeks about penal colony life}, he is the perfect foil for McQueen and the relationship is tender yet never twee. Fine support also comes from Anthony Zerbe as a compassionate leader of a leper colony & Victor Jory as an Indian Chief.

The production was an expensive one, with the original budget of $4 million ballooning to $14 million, making it the most expensive film of 1973. A couple of scripts were jettisoned {money down the drain} before Schaffner enlisted Trumbo to write the screenplay. A good move because Trumbo was able to flesh out character relationships that didn’t exist in the source novel. Hoffman himself was adamant that he would only play Dega if the film steered away from a buddy buddy formula and gave Dega intelligent integrity. He got it, which is credit to Trumbo since the Dega character is barely formed in the novel, in fact the film version is an amalgamation of several penal colony characters. Trumbo was rewarded with not only a considerable paycheck, but also a bit part in the movie as the colony commandant early in the piece.

Initial critical reaction to the film was harsh, but the public didn’t agree since the theatres were packed and the film made almost $50 million Worldwide. Making it Allied Artists most successful film ever. It has since garnered a massive fan base and has been favourably reassessed by a new wave of critics. Those old complaints about it being too sombre and too enduring to get thru just don’t add up. One only has to note the thematics and essence of the story to know this fact. 9/10

Papillon (1973)
Good Story ….,
….. But that’s all it is, a story. Having watched several documentaries on Devil’s Island there is some debate on weather Henri Charriere had even been an inmate at the penal colony, or if the claimed incidents happened but they all agree on one thing – none of these incidents actually happened to Charriere, other inmates maybe but not to Charriere.

Watching PAPILLON the film (I’ve never read the novel …sorry book) it just doesn’t ring true on arrival the inmates are warned about Madame guillotine but several times in the film Charriere violently attacks guards and Louis Dega is seen to hit a guard over the head possibly killing him, and these two trouble makers survive captivity and recapture without getting their heads cut off! Also unlikely is the scene where Charriere and Dega`s fellow escapee dies in a very dramatic way – just as Chairrere comes out of a hellhole after spending five years in solitary confinement. How very very convenient to have such a dramatic moment at that particular time, and one of Dega`s victims just happens to work in the reception area of the prison leading to some difficult work detail for him and Charriere, man astronomical bad luck just isn’t the word. Oh and where’s the depiction of ” The terrible promiscuity ” that History Channel documentaries refer to on Devil’s Island?

Controversy as to the veracity of Charriere`s book aside PAPILLON is still a rather average film despite its epic qualities, the script is very episodic and disjointed, McQueen gives a brooding performance which isn’t exactly bad but neither is it memorable. Hoffman is good as Dega but I can no longer take him seriously because he looks exactly like Adam Clayton the bass player from U2! I’m being serious here, watch PAPILLON and look at a photo of U2 post JOSHUA TREE to see what I mean