Midway – 1976
In every war there is a battle to end all battles. 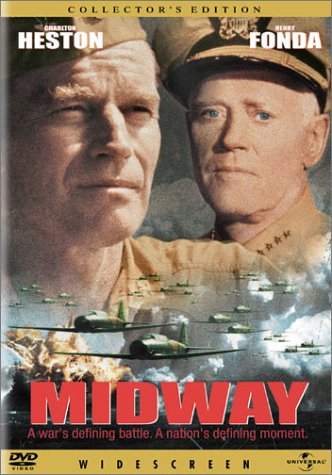 Plot:
· The summer of 1942 brought Naval stalemate to the Pacific as the American and Japanese fleets stood at even numbers each waiting for the other to begin a renewed offensive. “Midway” tells the story of this historic June battle where a Japanese carrier force, in an attempt to occupy Midway island and lure the American fleet to destruction, was meet valiently by US forces operating off of three aircraft carriers and numerous escort ships. It was the first battle in which naval air power was extensivly used, and at its conclusion the Japanese Carrier force had been completly destroyed which lead the way for the US 1943 and 44 offensives which would eventually bring the Pacific War to a close.

· The battle of midway is done with captions to identify historical characters. Historically accurate in it’s major points, a subplot of an American flyer who is engaged to a Hawiian girl of Japanese descent has been added. This is the battle in which the previously undefeated Japanese fleet was stopped in a battle during which all damage was done by aircraft. The opposing fleets never saw each other.

· The 1942 battles of the Coral Sea and Midway island are retold through the points of view of both sides. When an audacious US air raid reaches Japan itself, Combined Fleet commander Isoroku Yamamoto orders seaborne invasions of Port Moresby in the southwestern Pacific and of Midway Island near Hawaii, invasions that Yamamoto hopes will smoke out the US Pacific Fleet for destruction before the full might of US war production can kick in. The Japanese are supremely confident of victory over the vastly outnumbered US fleet, but they are unaware that US Navy intelligence has cracked the Imperial Navy’s codes, allowing the US to deploy aircraft carriers to maximum counteroffensive effect.

Torpid, Torpid, Torpid,
This has to be one of the slowest-moving war movies ever. And I was afraid of it back when it came out, because it was in Sensurround, which meant the woofers were tweaked low and you got to not only hear but feel every rumble as the bombs and torpedoes lit into the oil tanks and set the carriers ablaze. That was a pretty intimidating sound back in the day, lemme tell you. But that was a million years ago.

Midway was one of the greatest military battles ever, certainly the greatest naval contest of the greatest war ever, and as a conflict showcasing equal parts bravery, strategy, and luck. But this movie is a strange recreation that promotes aging 1970s star power over a coherent plot line. Most perplexing is the concentration on many over-the-hill American actors in telling the story of how the battle for Midway was won by the Red, White, and Blue. Charlton Heston carries much of the story, yet both his character and his actions are highly unrealistic. For a near-flag officer, we’re asked to accept him called on in a pinch leading a dive-bombing squadron at such an advanced age. Henry Fonda scratches his head as Admiral Nimitz, stuck at Pearl Harbor as the war is fought hundreds of miles away, while Robert Mitchum’s Admiral Halsey is confined to bed with a nasty skin condition, and Hal Halbrook as an intelligence chief seems to suffer from a bad case of BO. At least we were spared a John Wayne cameo, as an admiral who couldn’t leave the john with a nasty case of hemorrhoids.

In movies about D-Day or Operation Market Garden, we got to see a little more of a few of the trenchline view, which enhanced our appreciation of what was endured as well as what was won (and lost). Here it’s all a case of transferring flags and staring at maps by the highest commanders. Boardroom battles. Meanwhile, the Japanese high command seems populated exclusively by Arnold from “Happy Days,” Jack Klugman’s assistant in “Quincy,” and assorted North and South Korean extras from “M*A*S*H.” A nice sense of the decade, except that decade is the 1970s, not the 1940s.

It’s a battle whose story deserves telling, but not with cutscenes from “Tora, Tora, Tora” and “The World At War.” The tacked-on subplot with American-boy-loves-Japanese-girl feels suspect, like a politically-correct nod at inclusiveness at the expense of telling the story the way it happened. If they really wanted to be inclusive, it would have been a Zero pilot and his Yank girl, who swears she has nothing to do with awful FDR and his foul plans against Japan’s Asian Co-Prosperity Sphere.

What else is there to lambaste? The ridiculous supers we get around various characters, including no less than three around the lone survivor and Kojak sidekick George Gay, as played by Kevin Dobson? The silly radio chatter among the American pilots, who sound more like American Top 40 DJs than warriors trying to sink the Imperial Navy? I like the occasional hints of verisimilitude we get, like the oil burns around the cowlings of Avengers about to launch, but the blue paint on the American jeeps and the Essex carriers that substitute for the Japanese fleet distract too much for any real enjoyment. Read Gordon Prange, and leave this be.

I saw this in a theatre when it came out. The acting was dreadful, historical inaccuracies abound and the dialogue sounded like it came from a (bad) 1940s Hollywood war film. And don’t get me started on the pointless love story shoehorned in!

But, in original theatrical engagements, this was shown in Sensurround. Anyone remember that? It was developed for the movie “Earthquake” and also used in “Rollercoaster” and “Battlestar Galactica”. During the action sequences, theater chairs vibrated and (if I recall) actually leaned back a little giving you the feeling that you were in the battle. Also the stereo sound was blasting full force. THOSE sequences were great but only because of the Sensurround experience. Without it, it probably plays as a dull war movie.

So, I have fond memories of it but I’m afraid if I saw it on TV I’d hate it.